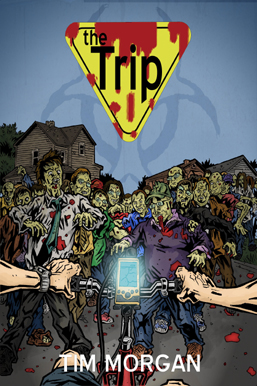 One trip, 3 characters, and a poop load of zombies! Welcome to the trip.

So, me and 2 others had to pick out a book for a challenge on one of my groups, and we decided on this one. And I did like it, but there was enough I didn’t like. Sadly. 🙁 It definitely had all the ingredients to be fabulous though.

We have 3 characters; Chris, Meghan, Dave. These 3 decide to go on a giant trip just before they go to college. And not just a trip, but on bicycle. Yep, these crazy kids decide it is a grand idea to go across the country. Though I also did think it was pretty awesome. Even though I had a few laughs at the fact they found it so much harder, gee, I could have told you that. I am not a pro or anything, but even I can tell you that biking around your neighbourhood or even just on an electric bike in your basement is going to be very different from roads, mountains, hills, mud, and anything else nature. It is going to be much harder. But it sure is creative for a zombie book. I wouldn’t mind more zombie x bicycle stuff.

Then there are the zombies. I am sure most of us have read enough books with people trying to outrun them, or speed away from them in cars, well imagine that with bicycles. Yep, these crazy kids will have to cycle hard if they want to evade the zombies that get on their path. They have to go through cities and towns filled with the creepy crawlers, and not only them, but of course humans. And mines. Lots of mines.

And along the way they don’t only encounter creepies, but they also see the full scale of the destruction. Homes broken into. Blood everywhere. People who decided it was best to just die in advance before zombies ate them. Body parts. Napalm. Bombs. And much more. It was at times quite hard for our trio.

Another thing that was a bit special is that there was apparently internet, running water, and electricity, or at least partially. I have only read a handful of books in which there was internet/electricity/running water during an apocalypse. Generally everything just dies quickly and people have to fend for themselves to find a way to keep warm, clean, or informed.

I did like reading Meghan’s posts. How they turned more desperate with each Now chapter. I just wanted to hug her and tell her it would surely be OK.

Ah, yes, one thing that was weird,

The book switches characters constantly which was quite confusing if I have to be honest. One moment it is Meghan talking, the next it is Dave, then it is Chris again.

Chris was a terrible character. I disliked him throughout the book. The decisions he makes are beyond stupid (in fact one of them I would call murder), and he keeps making excuses for everything and then proceeds (within a few minutes) to fuck up again. What? Why? Didn’t you say you were going to do things better? Do you not understand how things work?
Also the way he treats people is just the worst. He is a bit like a goldfish, or no wait, Dory. Oh I am so sorry for doing x, ohhh look boobs, goes to boobs and forgets all about what he just said. rolls eyes


I am religious myself, but I found the addition of some random prayers and discussions about God a bit out of place. I never got an impression these kids were religious, but then suddenly they would pray for a meal (and then x times they didn’t) or suddenly talk about God/Devil. It seemed to be mostly Meghan who was a bit religious.

I wasn’t too happy with the whole now/then thing. Sometimes it works, but in this one it just doesn’t. I don’t care about the preparation for a trip, I don’t care to see someone get infected with HIV and then do stupid things (Chris), I don’t care about graduation (and beach balls). Sure, I would like to see the start of their trip and when poop hit the fan. And yes, the articles at the beginning of the chapters, highlighting how things are going terrible, were interesting. However, we had before chapters until the freaking end of the book. Why? You could even see that the author had to hurry as we went from somewhere around Christmas/New Year to senior prom and then graduation in a flash.

The ending was pretty great, though I do feel it could be more. But I was happy to see characters be reunited, to see them get home, to see an x months after part. I want to wish all the characters good luck. I hope their world will be better.

All in all, it was still a pretty OK book, I did enjoy it.