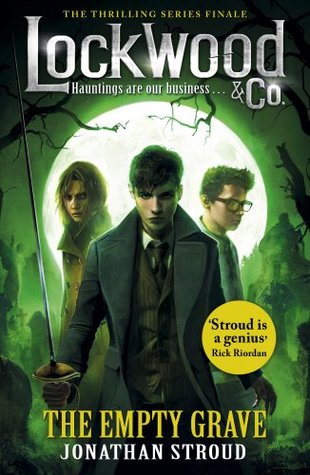 The final book, I don’t want it to end, but I guess considering the Marissa Fittes story is over, the series is over as well. Though I do feel there are possibilities for more books. Maybe in-between books telling us about Lockwood (or others) and their hunts for ghosts. We only see a few cases here and there, but I know that they had more cases in-between everything. Plus I still want to see certain couples get truly together (Flo x George? Lockwood x Lucy?) and not get vague hints and cute scenes.

Yep, this book marks the final battle between our group and Marissa Fittes. It also explains more about Lockwood’s parents (shocking!), and about the Problem and how that truly started. (OMG, I hadn’t even expected that, though I guess it makes 100% sense for that to be it. Plus if I was a ghost I would also pissed because of that.) It never was too much in one go, everything was revealed at a relatively calm tempo.

The book starts off with our group going on a grave-robbing trip, which was both hilarious and exciting. Hilarious because of the situation, exciting because of everything that happened. And a lot of things happen!

We also have a case with a very theatrical ghost! I loved that, as it gave a bit of peace and quiet while we were going for the climax with Marissa Fittes. Well, it wasn’t that peace and quiet, but I get what I mean. Compared to the end battle, this one was easypeasy.

Of course we knew that Marissa Fittes the one in charge of the Fittes agency, the skull already said it was her essence (and while the skull lies at times, I did believe him on this point). But oh boy, I didn’t expect that to be the truth about Marissa! I definitely had a lot of theories regarding her eternal life that she seemed to have (like her eating ectoplasm for breakfast/lunch/dinner, or her rubbing it on herself), but I never thought it would be that. No, I won’t tell you what it is. You will have to read this book to find out. grins Be in for a surprise!

My shipping heart was delighted with my ships. Flo x George is setting sail (I already had hoped for it, they just fit perfectly together), and Lucy x Lockwood progressing a bit further. I still feel that there could be more, but I guess the author didn’t want the romance/coupling to be a main focus, and I can understand that. I am still happy with the cute/sweet/heartwarming scenes he put in this book, thanks so very much!

We also see much much more of the skull, and I loved it. He is a foulmouthed creature, but I just love that about him. I always laugh my butt off at his sarcasm and how he always has a bunch of remarks ready in case it is needed. Plus he gets a bit more screentime in this one and I was so happy with that. He is a really important character, though I still wish we found out more about him instead of hints and bits.

There were times when I was shouting at my books, and shaking my boyfriend. I am sure people know which ones, and otherwise here is a hint for one of them: Kipps.

The ending was perfection. It all just clicked together. Of course the ending still left some things open, so I have hopes for more books.

Plus points to the cover, we already knew how Lucy and Lockwood looked, but we only saw George through descriptions in the book, and boy they really do him no justice if that is him on the cover. fangirls

I could go on a bit longer on the book and its awesomeness, but I think I have said the important things. All I want to say is that everyone should read this series if they are looking for a fantastic YA supernatural read.