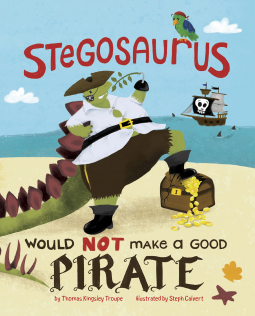 So I just had to have this book when I saw it over on Netgalley. Pirates? Dinosaurs? A combination of two favourite things? Sign me up! I was delighted that I got approved for this book.

This book chronicles the tales of Gary (yes, really, Gary) Stego. Who is a Stegosaurus (duh), but also a pirate (arrr!). I am sure that most of you can imagine the chaos that happens when you put a dinosaur as big as Gary on a ship.

We see Gary do his utter best, but sadly… it just doesn’t work. When he has to climb the mast, the mast can’t handle him. Clothes don’t fit him (though eventually they seemed to manage something). Every two pages is something that tells us that Gary may just have to give up on his dream as pirate. It is pretty hilarious, and I didn’t think it was that repetitive. Sure, you knew that what followed next would be a disaster, but what would happen? You didn’t know. Would Gary sink the boat next? Or would he accidentally throw people off board?

The ending? I definitely didn’t expect that career switch. 😛 Poor guy at the end, I hope he survives this.

The art is pretty decent. A bit simple, and Gary’s proportions seem to go from normal-sized, to a bit bigger than normal, to huge.

There are also questions at the end. I think it would have been more fun had the page numbers been removed. That would make it more of a hunt, now it was fairly easy to skip to those pages and spot the hint.
Lastly we also have a fact file on Stegosaurus.

All in all, I quite enjoyed this book, and I would recommend it to all the dinosaur and pirate lovers out there. 🙂