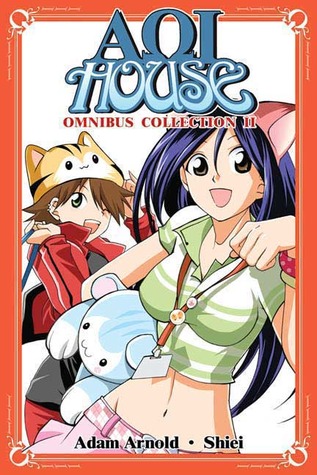 A really fun manga-styled comic! I had heard of it years and years ago, but never had an interest in until now. I also still need to read the first omnibus, so I was at times a bit confused, but not for too long. I am happy that they at least including a summary + a blurb, and also told us about the characters.

The book starts with our (y)aoi house going to a convention and taking with them way too much stuff. Before they get to the con however they get lost, visit all sorts of weird sightseeing stuff.
But then the con happens and I just couldn’t stop reading. This is the convention of my dreams. I wish my convention visits were this crazy, weird, over-the-top, silly, and engaging. I am sure I would be dead at the end of it all, but I would have had so much fun.

There are panels (which had me in stitches, oh my gosh, I want that panel in real life), cosplay events, battles between the houses, movies, awards, well, everything. Plus of course many many references to anime, game, manga. A few popular series, but also some lesser known.

And then there are a ton of tropes that have been thrown into the story. Normally an overload isn’t something I want, but in this case I am making an exception as it fits too well and makes everything more silly and fabulous.

I am not too sure how I felt about Elle(n). She was a bit too hot/cold for me. Too tsundere. At moments she was just depressed mess, and the next she would be shouting, screaming and raining terror upon anyone dissing her house or her favourite things. The romance plot surrounding her? Eh, it was such a cliche that I couldn’t really like it much.

Just a shame the story started sucking when the convention reached its ending. Up to that point it was 4.5 stars. But then suddenly weird stuff happened that just didn’t make any sense and totally sucked the enjoyment out of the book. Aliens? Tentacles? Silent Hill. Sorry no. It didn’t work out for me. After that part was over it picked up with a fun speedrun through the college days (though I wish that was instead highlighted over the stupid lost in nowhere plot), but then that side story. Sorry, but hamster x human sex is not what I want to know about. Eww. Even if it was a movie, it just didn’t sit right with me.

The art was pretty great and fun. I loved how the characters were drawn, and I loved the little details that were all over the book. Sometimes I had to flip back to see all the details. So much fun.

The ending was pretty cute, I loved seeing where all the characters ended up/how their lives went after college.

So if we forget about that awkward lost part, or the ecchiboo thing, and instead had something highlighting their college (and not speeding up, thank you), I would have rated this book a 4.5 stars. As it is now I am rating it 3.5 stars. I would still recommend the book, it did have its fun moments and I did laugh and enjoy seeing all the references/tropes.