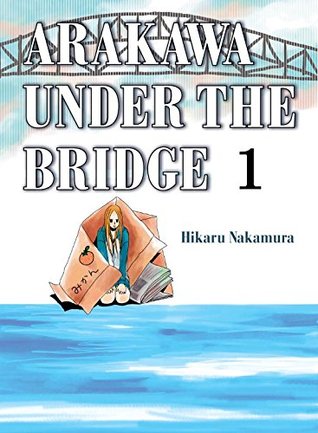 “Could you help me fall in love?”

I loved and adored the anime of this show and I kept hoping that one day someone would license the manga in either English or German so I could read it. And thankfully someone did! Thank you Vertical!

This volume combines the first 2 volumes, and I definitely loved it. Say hello to Kou, or as he is now know thanks to the mayor/(fake) kappa: Recruit. Yep, poor Kou. He tried a stupid thing on the bridge, had to be saved by a very not-impressed Nino, and doesn’t want to owe anyone anything (thanks to traumas by his dad). So he asks her what she wants, and she wants to fall in in love. He decides to help her and thus starts living in Arakawa.

Which is the start of many hilarious situations. From a dangerous mass with a gun-wielding “Sister” to getting milk/eggs from the Arakawa farm and getting chewed out by a man hating/sadist named Maria, every day brings something new for Kou/Recruit. At times he wonders if he wants to continue staying here, and I don’t blame him, the place is bonkers. 😛 Plus dangerous at times, especially with Sister and later on Stella.

I am not too sure how I felt about people treating Kou/Recruit. At times I thought they were acting quite shitty. Yes, Kou/Recruit has quite a big ego, doesn’t really get how life works without the use of all his money or all his achievements, but he does try his best, and I do see that he has a very kind personality. Well hidden of course, and mostly thanks to his dad.
For instance the name? Everyone has a pretty good name, but Kou gets to be Recruit (and he even had an option of an even worse name when he asked for a Japanese name). Then there was the time when everyone just barged into his little home under the bridge when the rain season swept away all their homes. They didn’t care much about the fact they were just breaking/entering. 😐
And there are other times as well. I am not too sure about the anime and if they got more friendly, but I hope for Kou’s sake they do. He does his best at least. And he is very kind towards Nino (though also confused considering the girl thinks she is a venusian).

The relationship between Nino and Kou is adorable, and I hope that they will grow together more, and maybe get more romantic. Though given how Kou is (and how he doesn’t even know how things work) and how Nino is (and how she is totally oblivious), I am guessing it will take some time. But I have patience, and I will enjoy all the little moments when they pop up.

I do like the cast of characters, even if they are a bit mean at times. We have people with all sorts of weirdness/personalities. From a guy who wears a star mask and plays guitar, to a girl who adores vegetables and is kind of dangerous, to a sister who isn’t a sister and who loves weapons.

It is also fun to see how they do their things in Arakawa. Bathing in a steel drum, eating fish from the river, grabbing whatever is findable to use for homes. It seems quite relaxing, and if anything, I wouldn’t mind living there. Maybe start up a library/book store (in exchange for food/services). Hopefully though I would be treated better than Kou is.

I am also wondering when the dad will be making an appearance in the manga. He is quite the disturbed character (sorry, if you treat your kid like this? There is something wrong in your head, you just don’t do the things he did here), so I am curious to see how things will go in the manga. So far it seems to follow the anime (from what I vaguely remember) pretty good.

I could go on, but I will finish with my review. I really enjoyed this one, the art is pretty good (sometimes a bit wonky though), I liked that we also have some (more philosophical) colour pages.

And while I am waiting for the next omnibus to come out, I guess I will be rewatching the anime. I need more Arakawa!

2 thoughts on “Review for Arakawa Under The Bridge Omnibus Vol.1”