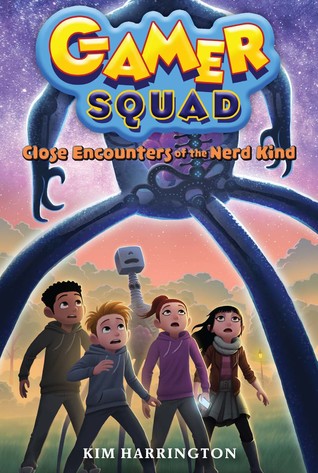 This time no monsters, but aliens who are teleported to this world.

And thankfully, well.. with the exception of Bob (I laughed so hard at that), the aliens are all quite nice, though very mischievous. 😛

It all happens the same way as the previous book, Bex falls against some “special” machinery, her phone hits it or gets stuck, and voilà things get stuck in their world. I do hope that the next book won’t have that happening, because I could use something different instead. And I also do hope that if it isn’t Bex, that it isn’t going to be someone else.

When our friends and their classmates go to an observatory, Bex accidentally does something that causes aliens to be teleported to her world! It is up to her (and her friends) to solve the problem, bring the aliens back home, and of course also get rid of Bob the evil alien. I just had such a big laugh at the fact the aliens loved math (ewww), oranges, and fell asleep when touched by a certain item. It was interesting that her phone/app worked as a translator as well.

It was all really exciting to read, and I was definitely rooting for everyone. I was laughing really hard at Jason and how much he didn’t want to be involved. How he ran away, or how he just turned around and noped his way far away from things.

It was fun to see Bex do coding (it seems to be quite a hot topic this year to have girls code), though I had a laugh at how simple it was to fix things. Sorry, but that is not entirely how it works. Believe me. But I guess making it more complicated would be boring + would just draw away from the battle with Bob.

Next to the whole aliens are out on our planet including one very bad alien, and oh yes, people are following us (I also can’t wait to see if that continues in the next book as I have lots of questions about it), we also have the friendship between Bex and Charlie. They are slowly drifting apart it seems or at least Charlie is having other things to do, and Bex is having a lot of trouble with it. Charlie is now spending more and more time with football, his brother, and other activities. I know the feeling that Bex had, my friends and I also drifted apart. 🙁
Plus we also have Willa and Bex and if they will be friends again. I was happy with how things turned out, I am glad Bex didn’t make any rushed decisions, instead, she thought about it, and figured it out as the story went on.

I loved the Marcus x Bex stuff. I am definitely rooting for those two, they make a cute couple. <3

I did think it was a bit ridiculous that the observatory banned a whole class of kids (for life btw). Really? I get that they broke expensive things, but is that a reason to just ban everyone and then be very harsh about it when two kids come to you? Sorry, but this was just a bit too weird to me, but I guess it may be something typical to America. 😐

I still think this book could do with illustrations, it would make the books even more awesome. Plus I just want to see the characters, the aliens (and in the other book the monsters).

All in all, I will be reading the next book soon (will be buying it after Christmas). I am really excited about it as it features zombies!