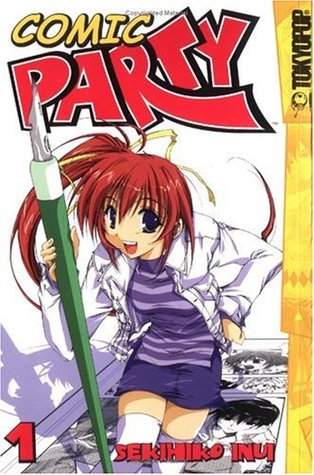 I sadly don’t have Volume 5 (thanks to Tokyopop quitting and making it very hard to finish series/find those last volumes), but maybe one day I will find it somewhere crosses fingers. Then I can finally finish this series for real.

I have already read this series a few times (though I lost count, and it was definitely before I found Goodreads), but I wanted to re-read it again before the year ended.

This was such a fun, but a bit over the top series, great characters (but also annoying frustrating characters (looking at you Taishi and Eimi and Mizuki)), it has a motivational story (don’t give up, even if everything seems gloomy (and this doesn’t just apply to the MC, but also to other characters he encounters).

I quite liked our MC, though at times I had a hard time liking him, he was just a bit too stereotypical or I found him stupid (since he focused so much on his doujinshi that it seems he forgot about his college). Plus it was just a bit silly that he got all the girls after him, but I guess it is just that kind of manga. What did make it better was that there was almost zero romance, so even though he had all the girls after him, he just stayed the same. Which is quite a chance from all the other books in which guys are being followed by tons of girls.
I loved how he found something he could do, after his rejection from art school he was in quite a pit, but thanks to Taishi he found out that even though he can’t go to the school of his dreams, he can still make art, he can still show people his art and tell his stories.
I loved how dedicated he was, and how he learned more and more with each comipa (though really, how many of those are there? :P). He met new people, people who helped him further with his doujinshi, with discovering how to expand his reach, how to make even better art.
He really grows as the manga continues, and it was so nice to see it happen.

There are a ton of other characters, and with the exception of Taishi (too annoying and really dude understand boundaries), Eimi (girl, please you are not that fabulous, thank you bye), and at times Mizuki (girl, please get the hint, and stop being so overly aggressive/violent, it is not a trait that is good), I quite liked them all. I think my favourites would be Asahi (I had so much fun to find out that she was an idol and that she wasn’t your typical idol, but instead a girl trying her hardest but losing her words) and Aya (who is just going her own pace, and who just keeps on drawing even if people aren’t noticing her).

There was one plot/story in the manga I didn’t like at all. The whole terrorist part. It was just silly, and while in a way it fitted, it also felt like too much, too silly, too weird. I would rather have seen something else happen.

Other than that? I loved each story and each character that it brought. And how each story makes our characters grow together much more.

The art was a bit hit and miss. At times it was pretty OK, especially in the later volumes, but the first volumes were pretty wonky at times (especially the faces).

All in all though I quite enjoyed this series and I really hope that one day I will find Volume 5!