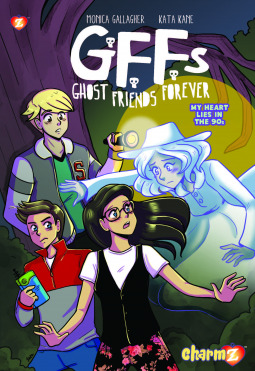 What starts as a way for Sophia to get on with her parents’ ghost business turns into so much more, and I was just squeeing in delight every page that Sophia and Whitney got closer and closer, and I was worried and angry (at who did that) when Sophia couldn’t see Whitney. Would she be able to see her again?

This book sure was a ride. I loved how Whitney and Sophia connected. They had an instant bond, and I just adored it. Sophia could tell Whitney all sorts of things, and Whitney was there to listen and give advice.

I liked figuring out what happened to Whitney, who the culprit was, and the reasons why it happened. I liked that it wasn’t a reveal that happened instantly, instead it took much longer and was spread over the entire book.

Plus due to Whitney other things also came to light + it gave the parents a bit more of a spotlight.

We don’t really find out much about why the parents got divorced. Yes, we get some hints, but not much. Something big happened, but that is it. Frankly, given that they still seem to love/care about each other I don’t see why they even divorced in the first place. Did someone threaten them or their kids? I don’t know. Hopefully we get some more answers in the next book.

The brother? What a terrible dorkweed that was. I am sorry that your best friend has a crush on your sister, but no need to go angry when she doesn’t reciprocate those feelings and instead falls for someone different. Gee. And then there are many other times I just wanted to hurl him off a cliff. 😐

I also didn’t like what Jake and Whitney did at one point, it just felt out of place and weird. Plus later on it is like it never happened….

Then there was a problem with pacing issues. At times we are at x location and the next page is a whole different location. But you haven’t had the feeling these characters actually moved. At times I just checked the page numbers to make sure that I was actually at the next page and not a few pages further. Case in point, after the parenting conference the mom returns home with notes from the kid and confronts him, the next page however is our group at the bridge again. And there are other instances in the story. It is quite jarring.

The art was so-so. It was a bit weird how a lot of the adults looked like teens (especially the dad) whereas the teens looked either older or their age. Perspectives are also a bit wonky at times (what is up with the giant teacher in one of the later pages?).

But all in all, this book definitely had its good moments. Whitney x Sophia (ship ship ship), the mystery of what happened to Whitney, the big battle/ending, that sweet thing on the last page, Sophia was a great character, I loved that each parent had something they were good in regarding the ghosts.

I will be reading the second volume when that one comes out.