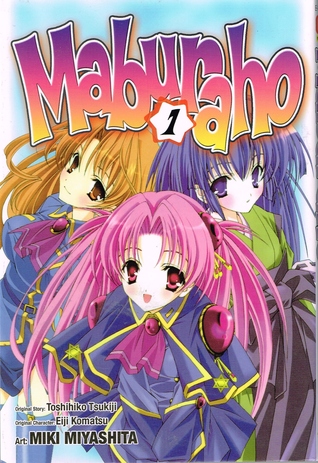 Review for the 2 volumes (complete series).

I bought these volumes some time ago, but never had the chance to read them. I bought them because I hoped they would be just as fun as the anime was. Though I have to say I can’t remember much from the anime any more, as it has been a few years.

One guy who has almost zero magic potential, but he has very powerful DNA (I am guessing that his awesome powers skipped him, now it is hoping that the next generation is more lucky, I know they are all vying for him, but it is just the simple truth that those powerful genes may just skip another generation :P). The guy is followed/stalked/loved by 3 girls. His childhood friend, a very rich girl, and a tiny girl who loves martial arts.

The girls will do anything in their powers to get this boy’s DNA. Though given everything… it is mostly Kuriko and Yuna who do most of the battling for Kazuki’s genes. Rin is there, and she also tries some tricks, but it is very tame in comparison to Yuna’s yandere attitude and Kuriko’s over the top-ness.

I loved the idea that this world has magic, but that each person has a number of times they can use it. Most people will have quite a bit of magic, but some people, like Kazuki have a low number. I do think it was a bit sad that you die/turn to dust when you use up your magic. I would rather have seen that person to be normal and not have any powers. Now, especially with those like Kazuki, it seems death awaits at every corner. You have to be really careful not to do things.

Kazuki was a pretty standard guy. You know, exactly like so many other harem/romance manga/anime. 😛 Average, average, average, but all the girls want him for some reason or another. I did still like him, and how he handled the girls. He tried to treat them with respect, he tried to be kind and sweet to them. I did feel sorry for him that he can only use his magic 7 more times in his life. 🙁 It isn’t easy for him, especially when he is surrounded by people with thousands of magic tries.

We also get several other characters in the mix, including Kazuki’s other childhood friend, Chihaya. I quite liked that girl, though I did think it was a bit weird that she entered so late in the story. Though I had a laugh at how she reacted to Yuna and her stupid jealousy stuff. 😛

The only thing I hated quite a bit was the ending. It was just so rushed, so forced. Of course I won’t spoil it (at least directly, but I do want to talk about it, so it may be a bit spoilerish), but I was pretty angry at how it ended. Don’t get me wrong, I could have guessed he would have ended up with that girl, due to how these tropes/cliche settings work, but I wished it was a bit more believable than suddenly BANG, over.

The art is also pretty good, though I have to wonder if the same artist also drew the cover/backcover, as the art looks quite a bit different (especially Kuriko) from the manga inside.

But all in all, I really enjoyed this series, and I will be reading it again someday. Plus I have plans to re-watch the anime again as I need to see the silliness in motion.