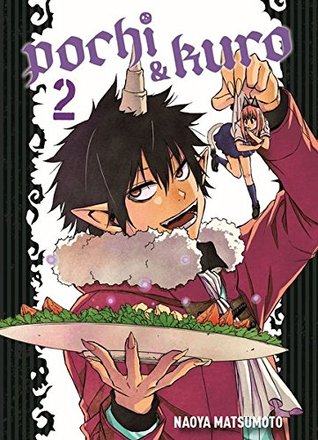 Finally had time to read this one!

It was such a delight to read, lots of battles (and hilarious ones at that, really, you can’t take these battles too seriously), romance (kyaaa), hilarious wolf stuff (the changing positions had me laughing so hard, even up to the end it kept changing), sickness (poor Pochi), food (om nom nom, give me some food that Pochi made), and more. This book never bored me, I just couldn’t stop reading.

We didn’t really move a lot in the story, as quite a chunk of the book takes place at the Leo’s mom place or the surrounding area. But it seems the next volume will bring even more excitement as they are finally going to set sail!

I am also still shipping Kuro x Pochi, though I have to say I am also having a small cheer for the Prince x Pochi. The prince is pretty handsome, and he isn’t such a bad guy after all. Though he is probably going to deny it all if you ask him. 😛 Oh, and maybe blow you up because you dared mention it.

Oh, and I hope that Pochi is one day able to talk/be understood. Now at least we have her understanding them (provided they touch her). Though it is funny that anything she says/writes is in gibberish.

I still love the art.

I will be getting the next volumes as well, thanks to the German publisher for publishing these. I was hoping someone would pick it up (either in English or German). And of course I would recommend this series.