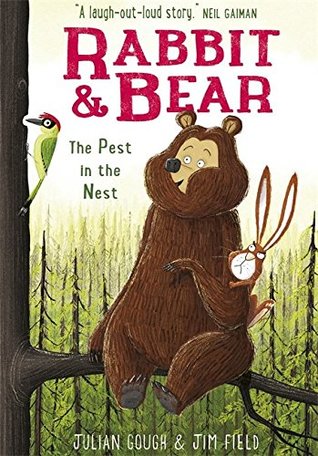 The second book in the Rabbit/Bear series, and this time I managed to find the book in English!

I was quite looking forward to it, though I have to say I didn’t like it as much as the previous book. Not only do we have an annoying rabbit still (then again, that is not that weird he is one of the protagonists), but we also have an annoying woodpecker. Sorry, I just have no love for animals like woodpeckers. They look nice and pretty, but their pecking…. good grief. I just could hear it even though I am reading the book. Not a good thing when one has a headache already.

Plus the whole message was just too much sugar and sweetness. Really, can’t we just have characters be pissy/unhappy (then again, it seems that Rabbit is always grumpy). But just like the previous book there is a whole message and moral thingie, and frankly I just didn’t like it that much. It just felt too forced to be good.

The bear was still the best character but she was just a bit too goodie goodie to be much enjoyable in this book. I get that she wants everything to be happy go lucky, but sometimes you just have to let people be themselves, even if that means they are annoying as hell.

I did like that this book took place so close after the first book, and that it is now becoming spring in their world.

The art was definitely the best in the whole book. I just adore Jim Field’s art!

Though I have to say that one thing was a bit off, the book describes the woodpecker’s head as a green blur.. but her head isn’t green? It is grey/black-ish.

But will I continue this series? Mm, no, I don’t think I will. 🙁