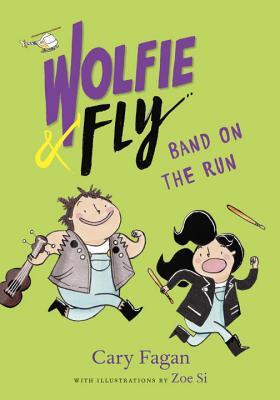 This could have been better without the magical element that is never explained. And it seems it happened before. I get imagination, but this is something beyond that (given the drumsticks that make a reappearance later). I just didn’t think it fit the story that well. Which is a shame as the rest of the story was pretty great.

I loved our down-to-earth Wolfie, or Renata. How she looked at everything without a shred of imagination. It is kind of refreshing to have a character who acts like this and not also be annoying. I loved how she gave Fly a chance, she could have thrown him out of her house, or shouted at him, or be mean at him, but instead she helped him out, instead she participated in that event with him. Which I found so sweet of her. I am not sure if I would have acted the same way if I had such a stalker friend. 😛

Fly? Well, I am not too sure what to think of him. On the one side he is sweet and nice, but on the other hand, who the hell climbs into a home through the window when he is clearly told not to come in? Fly just didn’t seem to have common sense.
I did like his song, and how he helped out Wolfie.

I am also a bit confused, when the Talent Show starts it says on a sign: Talent Show Tonight! But the talent show starts at 4 in the afternoon. Unless I missed something huge, tonight means evening (or night) and evening doesn’t start until 6pm.

The talent show was really fun, I liked reading about the other participants and what act they had.

There are also illustrations and I just ADORED them. The style is just perfection, it is adorable, cute, and fun. I love how the characters were drawn.

All in all, if the imagination or whatever it was part was toned down/explained, it would have been perfect, for now it is just a really good book that I would still recommend.