Welcome to the Blog Tour for the Rhuna Series by Barbara Underwood, yep that is right, today I am highlighting an entire series!~

Which means I got a information about 4 books, but I also got an excerpt for book 3: Rhuna: The Star Child, and the first two books got book trailers! And then lastly, I also got a giveaway.

So let’s get this Blog Tour on the road! 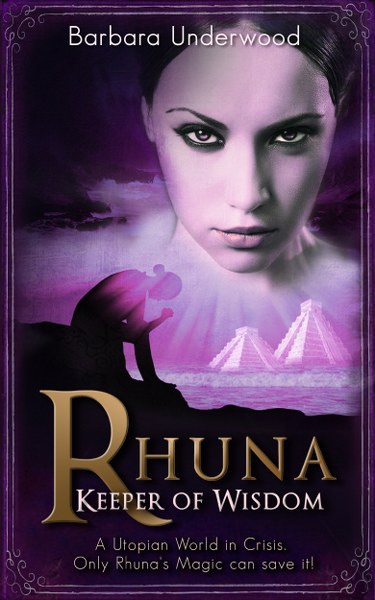 In the ancient, mystical past when an idyllic Atlantis-like civilization flourished, its people with exceptional powers could build giant stone structures like the Pyramids, and transform elements such as sand to stone and metal to gold with concentrated energy of the mind.
This utopian Atlan Empire is rocked when one of its most preeminent Masters rebels and seeks to subvert the ideals of Atlan society. Roaming the countryside in a black robe, misusing his powers on innocent people, he becomes known as the dreaded Dark Master.
On a distant and isolated island on the fringes of the Atlan Empire, a young girl named Rhuna comes of age when she meets a man from Atlán and learns that her father was an Atlan Master who was killed in his attempt to destroy the Dark Master.
Journeying across oceans and ancient worlds, Rhuna learns to master her inherent mental powers, transforming elements and summoning visions by means of the Gazing of the Waters. Unlike her peers, however, Rhuna discovers she has an extra power, namely the ability to summon visions mentally, without incantations or powders.
When the Dark Master’s activities become a threat to the peaceful Atlan Empire, the Atlan Masters come to realize that they cannot defeat him without Rhuna’s special visionary powers to observe the Dark Master’s activity and whereabouts.
The first book in this extraordinary Urban Fantasy series lays the foundations of the Atlan Empire and Rhuna’s world, and even when the Dark Master appears to have been defeated, secret and sinister powers continue to threaten the ancient Utopia. 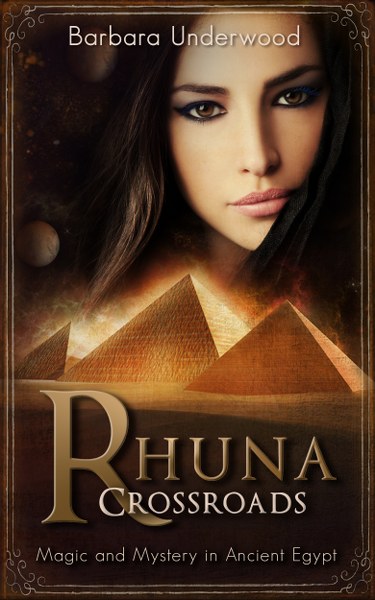 This exciting second book in the Rhuna YA Urban Fantasy Series can also be read as a standalone novel.
Some years have passed since Rhuna helped to defeat the Dark Master in her new home of Atlán, and now Rhuna has a teenage daughter who accompanies her on an assignment in Ancient Egypt to investigate some disturbing reports.
She soon discovers an astonishing underground network of the Dark Master’s followers, along with the secret group of Atlans dedicated to stopping them. In the process of trying to carry out her assignment, Rhuna is confronted with enormous challenges that could drastically change her entire life and everything she has ever believed in! 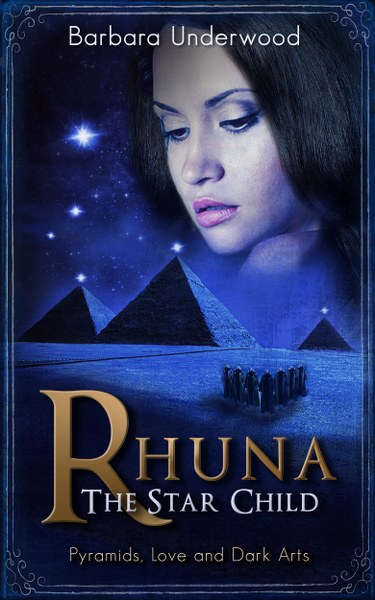 This thrilling sequel to Rhuna: Crossroads is set in mystical Ancient Egypt where Black Magic was developed by the followers of the legendary villain, The Dark Master. As strange and frightening curses plague the population, Rhuna discovers the underground organization that performs this uncanny new magic, but she can only combat it with the help of her long-lost father. Having learned from her father amazing new skills to empower her on the Astral Plane, Rhuna once again strives to preserve peace and harmony in the idyllic Atlan civilization.
Far more challenging than fighting powerful Dark Forces, however, is Rhuna’s personal anguish when her daughter becomes involved with the leader of the Black Magic movement, and the once-perfect Atlan society based on utopian principles begins to crumble all around her. Shocking events escalate Rhuna’s world to a breathless climax as she and her family undergo a momentous upheaval, and she is forced to make great personal sacrifices for her loved ones. 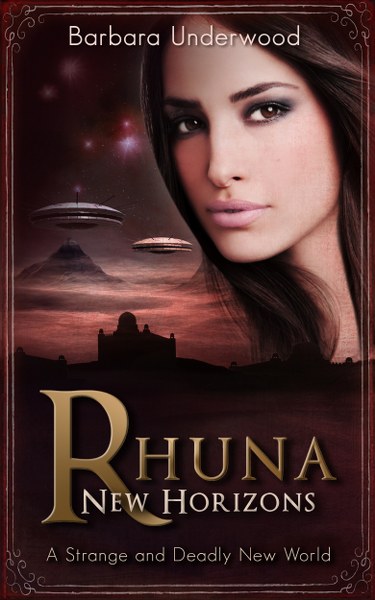 The fourth book in the series, Rhuna: New Horizons can also be read as a standalone novel.
After sacrificing a life of comfort and security for her daughter’s sake, Rhuna and her family go into exile and start a new life in the former Atlan colony of Varappa. This faraway land is a frontier of new technology such as air travel, loops in time and a society apparently flourishing without a governing body of any kind.
On the surface, everyone appears to thrive in this liberated society, but this kind of free thinking is fertile ground for the Dark Master and his followers. Just when Rhuna and her family settle into their beautiful new lakeside home, strange things begin to happen. Powerful conjurers cause upheaval with their sinister magic, driving people from their homes.
An isolated society claiming to adhere to the ways of the First Atlans, appear to be fighting a losing battle against these followers of the Dark Master. While attempting to find a diplomatic solution to the escalating conflict, Rhuna faces great challenges in her personal life. Aradin’s love for her has cooled off inexplicably, and Lozira’s emotional wellbeing teeters on a precarious threshold. In desperation, Rhuna combines her magical powers and Varappan technology to do the unthinkable. What she does, however, is forbidden, and brings about a rift between her and her own father. Rhuna may have headed down a path from which there is no turning back…

Barbara Underwood was born and raised in Sydney, Australia; the only child of German migrants who provided a rich and diverse childhood environment. Already in third grade she wrote a short children’s book for a class project and realized that she was deeply satisfied with creating stories. In sixth grade, for another class project, her teacher was so impressed by the lengthy story she submitted, that he commented at the end “I see we are going to have another author”. Over the years Barbara kept writing one thing or another, but only as a hobby while she pursued other interests and goals. In the 1990s, she completed a correspondence course in professional writing, doing it in her spare time after work. This led to having a few short stories published, but what she really wanted to do was write a proper novel.
At this time, Barbara had travelled extensively and gained a wealth of knowledge and experience in subjects that held special appeal for her, namely ancient history, myths and legends (such as Atlantis, the builders of megaliths around the world), folklore (the belief that a god-like race gave mankind its technology), human psychology and the culture of other countries. What better subject for her first novel than to combine all these elements into one big adventure!

A rustle of fabric alerted Rhuna of a presence behind her, and she turned to look at the open doorway where an attendant ushered in the prominent guest.

Rhuna watched in awe as a tall woman with intensely dark skin strode elegantly towards them, her bare arms boasting gold bracelets and other glittering jewels. She remembered Shandi’s words, black woman, and let her gaze quickly take in the impressive stature and colourful textiles.

“I greet you,” she said, startling Rhuna with her deep and resonating voice. “I am Uxbana of Zambalu, The Queen of the Land of Ubanti and of the Ubanti People,” she said proudly.

Rhuna stepped forward to greet her in the traditional Atlan way, and a black hand with long, slender fingers reached to firmly grasp Rhuna’s hand. The tall woman’s arm jewellery jingled briefly, and Rhuna sensed both the woman’s outer and inner strength of character.

“You? You are the one they call The Star Child?” Uxbana said with arched eyebrows. “You are so…small.”

“The people of the Land of Ubanti are among the tallest I have encountered,” stated The Reigning One in his usual monotone, and then quickly motioned for Uxbana to be seated opposite Rhuna in a richly decorated chair. Rhuna remembered what she was told about chairs at her arrival in Safu, and still found it amusing that The Reigning One’s forefathers liked to sit higher off the ground than others in order to emphasize their status and superiority over others sitting on the floor.

“Physical attributes are superficial,” Uxbana said as she slowly lowered herself onto one of The Reigning One’s chairs, and Rhuna noticed that she still towered over her even in a seated position.

The Reigning One lifted a finger, and two attendants appeared at once to offer a large platter of food and a choice of beverages. Rhuna watched as Uxbana chose a sample of each food group, and then requested a large drinking vessel of the popular brewed and fermented barley beverage.

“My emissaries have reported to me about the grand stone buildings in this land,” Uxbana said with a mouthful of sweet honey cake. “It is always astute, is it not, to cultivate good relations with one’s neighbours, especially when there is much to be learned and gained, such as the Knowledge of Safu that is becoming famous in the entire world,” she said, and then took several large gulps of her beverage.

“However, our attempts to learn more about Safu have been strangely undermined in various ways,” she added as she took another mouthful of food.

Rhuna felt her skin prickle as she realized that Uxbana was referring to the acts of the Dark Ones.

“Several of my emissaries fell violently ill before reaching Safu, and several others, travelling together on a barge down the Great River, were attacked by both crocodiles and hippopotamuses,” Uxbana continued.

“How extraordinary,” The Reigning One interjected in a slightly elevated pitch, telling Rhuna that the rigid, disciplined man was in fact very surprised.

“Perhaps the lack of rain in recent lunar cycles has made the river animals agitated,” Uxbana suggested, but Rhuna saw from the hint of a frown on The Reigning One’s brow that he dismissed this idea.

“My emissaries have reported to me about curses,” Uxbana continued in a loud and firm tone, looking directly at Rhuna. “But let us not argue about the verity of curses,” Uxbana added with a quick dismissive wave of her hand.

“I have come to acquire the knowledge and ability to make our land of Ubanti like Safu, namely to build pyramids, stone roads, stone block houses, irrigation walls and metal tools,” she stated.

“These things were made with the power only Atlans possess,” explained Rhuna, and the black woman’s eyebrows arched questioningly.

“Transforming sand into stone blocks, or water in the case of the First Atlans in Safu, are exclusively the works of very skilled Atlan Masters,” Rhuna explained.

“My emissaries have reported to me of your grand deeds on behalf of the people of Benshu,” Uxbana said. “You made a city for the common people, all by yourself…”

“I transformed sand and dirt into stone building blocks so that the people could make better homes for themselves,” Rhuna confirmed.

“What else can you do?” she asked sharply, her obsidian eyes gleaming.

“I can transform metals for tools, plating on doors or walls, make glass from sand, soften stone so it can be shaped or cut…and I can also break down big rocks, or cause cracks in walls,” Rhuna said, remembering the unintentional damage she caused during her first lunar cycle in Safu.

“Why should only Atlans have this power?” shot Uxbana with an angry frown and flaring nostrils. “You are not even a pure Atlan!” she spat, as her gleaming black eyes bore into Rhuna. “I have heard about your great feats on behalf of the Benshi people, but you are not how I imagined you,” she challenged.