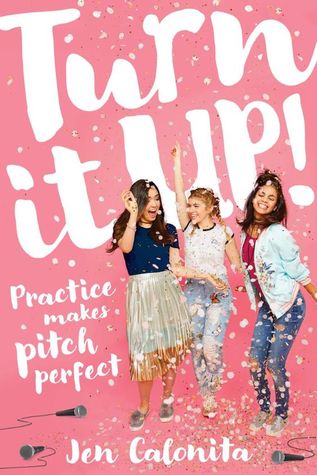 This was one of the books I was really looking forward to in 2018, this month specifically. Music, a Capella stuff, multiple POVs, a cute cover, boys, competitions, what more could I want. Well, what I wanted was less effing drama.

Because within those 37% there is so much drama that I was just rolling my eyes so much they popped out of my eye sockets and I had to put them back again. Yes, if this book can do over drama, I can as well. 😛 I am not sure who of the two bickering girls I did like, but I guess neither. Sydney for being a total bleh bleh and not being honest to her best friend (really, you kissed her crush, you don’t just not tell anything, you go to her, you talk to her, you don’t let it simmer/rot). Lidia for not understanding that maybe some things are meant for private, and not in the middle of auditions or a recruitment party. I mean, I get that you feel poopy about the fact your friend betrayed you, and yes she is acting all high and mighty about it, instead of talking about it she just squirms and tries to dodge out of it, or when she finally tries to talk she makes bad excuses and then uses a film script, but there is a time and a place for everything. These times were not times to do this.

And come on Sydney, just be honest with Griffin, tell him why you are hesitant. Now you are just pushing him away, hurting him, and being a total bitch about it. He can’t read minds, you know? If you want to tell him to not do anything, you will have to tell him why.

Next to the whole dramarama between two supposedly best friends (though I don’t see it anywhere) we also have two mean girls who can just rot away for all I care.

Julianna was the only one I cared about, the only one I want to see, the only one.. well you get the idea. Sadly, she is just one of our three POV, but I would rather have hers be the only one. I don’t care that we then still would see the drama, but it would be from afar, and not close by.
I really liked Julianna, from the moment we saw her I knew I would like her. Sometimes that happens with characters.
I love that she likes to do singing (she can deny it all she wants, but I can see it, especially given what she did on 37%), but also can play instruments, and that she loves songwriting (though sad to see she is not winning prizes).

Also Lidia? Girl? Just be honest that you actually want to do dancing more.

So yeah, nice idea, and I was really looking forward to it, but drama drama drama is not what I was looking for. I can see that drama will probably go on through the whole book, and no thank you.