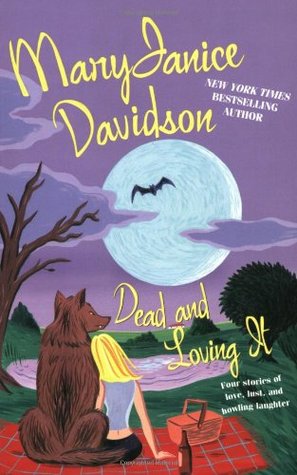 I was over the moon when I spotted this book at the ABC Store’s (English book store) bargain department! I have been meaning to read this book for ages, but I never got the time to actually buy it, oh and not to mention that I also had so many other books I wanted!

I will write a short review per book, well, short-ish. 😛

But before I do that, I want to say that I liked that each, well with the exception of the last story, switches between the two MCs/lovers. You can see what happens from both perspectives, see their views on it, see their excitement. The last one doesn’t feature that but then again… it is George, um sorry Garrett, we are talking about and those who read the Undead series know he is not a big talker/he is still recovering.

Ah, and with the exception of the last story (yes, again), each of the stories also have a cameo appearance for the characters of the previous story. So in Janet/Dick’s story we see a cameo for Alec/Giselle, and in Crescent/Drake we get a very impressive cameo from Janet/Dick.

Then there is the fact that I just adored that in two stories the girls were definitely not impressed by their lover’s werewolf status. That just made me snigger as the guys were totally startled.

I also want to warn that this book is very graphic, sex-wise. Then again, those of us who have read other books by this author know she loves writing them. This book is chock-full of swoony, sexy, steamy, OH MY scenes.

Santa Claus: 4.5 stars. This was pretty much too adorable, I loved both the Alec and Giselle. They were just too cute together, though, I did feel there could have been a better build-up in regards to the sex. Now it just felt a bit too rushed, too sudden. Plus I would definitely be creeped out with how much ahead planning this guy did. I would be pretty hesitant, even if I knew what had happened during the sex, to just agree with him. But then again, Alec was yummy. Yes, I got a clear visual in my head with regards to how he looks and oh my fans herself. Plus I just adored his accent. He was also just too sweet with Giselle.
Giselle was also a wonderful character, though I did feel sorry that she felt the way she did about her body, and then didn’t even want to believe she hit the jackpot with Alec. I hope that Alec can convince her that curvy doesn’t mean bad, that there are guys that just love girls to have more on their body.
I am very happy with the ending though, I would have loved to see their courtship.

Monster Love: -infinity stars. I am so sorry, but a big fat WARNING WARNING: Rape. Graphic rape.
I was really disgusted and startled when Dick just kidnapped Janet, tied her to his bed, made her his prisoner, didn’t believe her when she tried to explain (then again really who the fuck needs to explain that they have a job and had to leave), and then proceeded to rape her. A lot. In graphic details, I didn’t read everything as I quickly tried to save my brain (not that it helped as I slept terribly, thanks to the graphicness and the fact my mind likes turning words > pictures. 😐 I still feel urgh and terrible even though it is now the next day). I skipped through this story, only read continuously when Janet went full werewolf. Sadly I am not happy with the ending. Stockholm syndrome much? So no, I wouldn’t recommend this story at all. Avoid at all costs.

There’s no Such Thing as a Werewolf: 5 stars. Ah, we are back at the cute/sweet/adorable stories! This time with a blind werewolf named Drake and a girl (who has way more awesomeness in her than we know at the beginning) named Crescent. I just adored this story, it was the best one for me. It was also the tamest out of all the stories. I had lots of fun seeing Drake and Crescent get closer to each other, but also figure out more about what or who Crescent is. I had my suspicions, but I totally overlooked that option. Oopsie. 😛
Drake was just too sweet for Crescent. I loved how he went full protective mode and tried to care for her and make her happy. They do make a wonderful match!

A Fiend in Need: 4 stars. Yes, this was the story I was looking forward to, I just adore stories that feature Betsy, and while in this one it isn’t Betsy who is the MC, she is still there and making her hilarious snarky remarks, wearing her epic shoes, and more! This time we have Antonia as MC, she is a werewolf who can’t change, but she does have something else instead, she has visions. Which were pretty awesome, and I can’t wait to see her in book 5 and see what kind of awesome stuff she will do there.
I was quite amused at who turned out to be her lover. I hadn’t expected him, and I also found it slightly creepy, mostly because he was still not 100% normal. But then later on, well, I fell in love with this couple and I did think they were made for each other. I am happy that we learn more about him (that backstory is sad) and that he seems to be recovering at a steady pace.

Of course next to the romance, sex, more romance, and lots of werewolfiness and vampireness there is also humour. I often had to laugh at the conversations the MCs were having or the situations they got themselves in.

All in all, with the exception of that very NOPE story, I would recommend this book to everyone. I didn’t feel like I missed anything in the werewolf stories (though I am planning to read them to find out more about these wolves), but I would recommend that people read the Betsy stories first (up to 4) before starting this one.