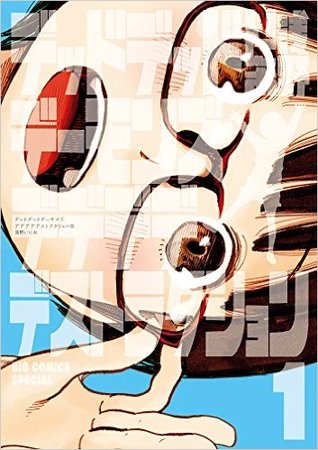 “When you look up at the sky, what do you see? A blue sky? Freedom? A hopeful future? The people of Tokyo see none of these. Instead, an ominous alien mothership looms overhead, engulfing the city skyscape.”

Yep, I was definitely intrigued by that sentence when I spotted this series. But in the end it just felt short. Mostly because it is about the daily lives of several girls, all friends, with some aliens/spookiness/feeling of something wrong. I was just hoping that it would be a bit more about the aliens, maybe some more threats and danger instead of girls just going their way and trying to get into college. You keep seeing the aliens (or well the ship/ships) and you feel unsettled but then nothing really happens!

The characters are interesting, but very goofy and weird. I am also a bit confused about their age, they look like middle-graders, but are instead high-schoolers about to graduate (it wasn’t until I saw one of them drive and the other talk about college that I saw that they were much older). Most of the time we see them go through their daily lives, thinking about if they should leave Tokyo and go to somewhere safer (as people say that those who stay in Tokyo are pretty suicidal), trying to graduate and get to college, one of the girls has a short romance (with a terrible dude), one girl’s dad is missing which caused her mom to go pretty wonky, but we also see them think about the aliens and discuss it.

I did love how they revealed the aliens to us. At first it seems everything is just happy happy, but then you see them look up at the sky.

We also find more out about the aliens, how they came to be in Tokyo, we see aliens (who look pretty human). And there are some revelations that me wonder about the true intentions of both the humans and the aliens.

The art is gorgeous, well I should specify, the backgrounds/scenery are amazing. The characters are hit and miss. 😛 Especially the side characters feel like the author just couldn’t give a fig about their design.

I would continue to read this one, but frankly I am not that much interested in reading it further. I may just wait until it is done and then check the last volume to see if something happens with the aliens.