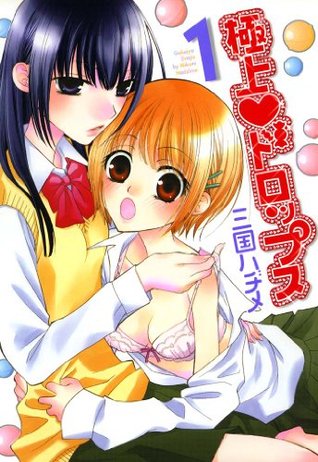 Review for Volume 1 to 3 (which is the complete series).

A transfer student, romance, ecchi situations, dorms, cuteness, sexy scenes, a twist at the end that made me go aww, and much much more!

Be warned this manga is definitely not for the younger readers, I would recommend 18+.

I was looking for a new Shoujo Ai/Yuri manga to read when I stumbled upon this one and just loved the cover instantly. And then I started reading it, and while at times it was a bit too steamy, I still couldn’t stop reading, I had to know if Yukio and Komari would end up together or that something would come between them!

Komari is looking for a dorm to stay at her new school and stumbles upon Paraiso no Yakata. There she meets all sorts of girls, elite and rich girls, and she is allowed to stay… if she becomes the servant of Yukio. But this servant thing quickly turns into a lot more as Yukio is quite the girl to go for it and Komari quickly finds her in various situations she never knew she would want or like. 😛

Yes, I say like, as Komari quickly finds out that she is very much attracted to Yukio. She is even falling in love with the tsundere girl. And we can also see Yukio is falling for Komari.

Komari was a terrific character, though I would like her to say no a bit more often, instead of having her just moan and look quite happy when she is stripped or touched by others. 😉 She is quite dedicated to Yukio, and I think it was quite sweet. Also later she does some really great things for Yukio and I was just cheering for this girl.
Her tic of cleaning up when she is restless? It was quite funny to see her clean the dorm from top to bottom, or just aimlessly clean here and there when she was anxious (like at the beginning when the girls were discussing if Komari could stay).
It seems she is also quite smart (if she gets a bit of help with studying), and she can also cook and is quite handy with other things.
I did feel sorry for her for having to have moved so much in the years, and then also when we found out why this girl was so terrified of the dark.

Yukio was also a pretty OK character, at times I was angry at her cold demeanour but we do find out why she is acting so cold, and frankly, I can imagine that she has a hard time trusting people or opening up to them. I loved that she opened up more and more as the story continued. Eventually you could see that she was happy and having a lot of fun in her life.

Not only does Komari attract Yukio, but she is also getting stripped and touched and kissed by various other girls in the dorm. From the twins (who also go for it together, yup, twincest) to one of the older girls, everyone is interested in this girl. It was at times a bit silly and hilarious and outlandish. Komari would be looking around for the bathroom in the dark and then stumble upon Erika only to have her clothes removed and almost ending up having sex. Even though the girls know that Yukio won’t like it when others touch Komari, they still try, even when Komari and Yukio’s relationship is pretty far along (like that one thing that the twins did to Komari when one of the twins spilled mayonnaise over Komari). Again, it was a bit weird, but I also have to say it was sexy. Sorry, I just can’t resist a good yuri scene.

The ending, or should I say, the last volume, was pretty great, and while I did think the twist/surprise was a bit silly (as it seems to come out of nowhere), I also thought it was sweet. And no, I won’t spoil anything, haha!

The art is pretty decent, I am still not entire liking Komari’s design, it seems to be deliberately done that she isn’t super-pretty like the other girls. Not saying she isn’t pretty, but if you compare her to all the others in the dorm… she does stand out a lot. The sexy scenes are drawn fantastically, very steamy and hot.

All in all, I really enjoyed reading this manga, though I am still quite hot due to the steaminess of it all. I would recommend it if you are looking for a cute, sexy manga with sweet and fun characters.