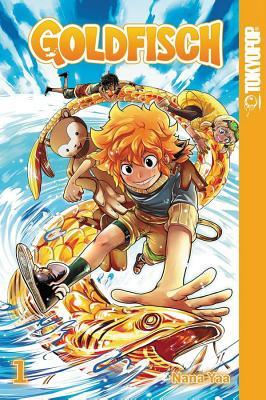 An adventure manga-styled comic about a boy with Midas Touch. Yes, this kid can turn anything to gold (well, except himself it seems, but everything else is fair game). How he got that way? Well, you will find out in this volume, along with lots of adventures, fun, chases, and dangers!

I am not too sure how I felt about Morrey. At times he seemed like a good kid, but a lot of times I was shaking my head at his stupidity. Oh hey, here is a golden apple… what did you think would happen then? That people would just keep mum? Hahahahaha. 😛 He is quite the typical hero you see in Shounen Manga. Strong, powerful, but a gigantic idiot as well.

I was already wondering how Morrey dressed himself, but it seems he has help from his Otta. Which had me in stitches, that little dude is a pro in dressing Morrey.

At first we see how Morrey met Shelly, and then later someone else as well, then we quickly get a flashback to how he has gotten his golden touch and what happened to his brother. After that is time to figure out how to save Morrey’s brother, and much more. Yep, you will never be able to look away while reading this one. It was definitely a fun ride. Plus I love the world these characters live in, and I wonder how the water got to be so polluted.

So I am giving a few less points due to how, I am guessing, Netgalley formatted the comic. Double pages are flipped, which meant more than a few times I had to turn my head around to read the pages. Not to mention that the text was already itty bitty at times, but became even itty bittier on those pages. 😐

Also it was quite annoying that while this book was read in the normal Western way (left to right) the text/the comics itself were read as manga are read. Since I never saw this one as a manga, plus added that you read this one as one would do a normal book, so from left to right, I kept mistakenly read it the wrong way a lot of times. 😐

The art style was really cute and fun, it really reminds me of shounen manga.

All in all, this was a pretty fun first volume, and I am quite excited to read the next volume of this comic, especially given the ending! ARggh, cliffhanger!