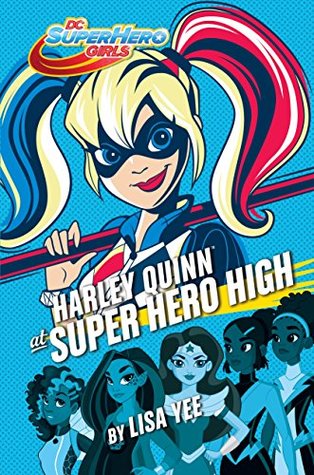 Ah, this was just perfection! Then again Harley is one of my favourite villains. 🙂

Ever since I heard that the Super Hero High would continue, with a new MC every book, I was hoping that one day it would mean Harley Quinn would get the chance to shine in the spotlight (more than she normally does). Imagine my happiness when I saw that this book would come out! Yay! Harley Quinn.

This time Harley is up to her usual jinks, but also some new ones! This girl’s mind is bubbling with ideas and of course, it is Harley, she just can’t wait to get to planning and starting them! In this one we have her go for a dance competition and a battle of the bands. I have to say I loved both the ideas, but I hated what Harley did at the end of the dance competition. No Harley, no. I get that you can’t choose, but you have to! But she did her best, and she held out longer than I had expected. 😛

We also see her trick several of her friends, make a ton of videos of everything (and also not, as she gets in a bit of trouble), try to do homework (but fail epically) but also see another side to her. We see that her life isn’t always the happiest but that she just tries to be as happy as she can. I am happy that the author also showed this side. Because Harley isn’t just a happy happy girl, she also has her fair share of problems and things she doesn’t understand (like friendship).

Of course this book wouldn’t be about superheroes without some action and battles and a villain! Yep, we have a new villain and it is a mad one (madder than they are normally). I loved his plan though, that is just brilliant. But I also loved the battles and the chaos that ensued. Harley also shows that she knows how to kick butt and she does so splendidly in this book. I was cheering for her and hoping she wouldn’t make a mistake.

I am also happy to see all the other supers and villains, those in school, but also those visiting during the competitions.

I still think it is a bit silly that the one who is MC also gets that at the end. At first it was pretty nice, but by now I just don’t look forward to it any more. I get that they can’t just not give that to the MC, but still.. it would be nice if there was a little twist!

I could probably talk some more about this book, but I don’t want to make this review too long! So I will just end with that I would recommend this book to everyone, it is such a fun one to read. I just adore Harley! <3