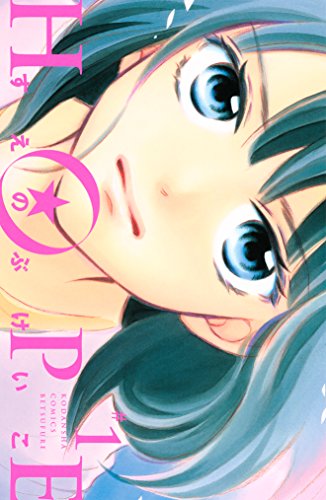 Hope, determination and following your dream.

I had to read a book with the word hope in the title, and I thought why not a manga? I quickly found one and I was instantly interested.

This was a pretty decent manga about a girl who loves manga (even to the point of going to the garbage heap near her home and reading manga there (and even falling asleep on trash, eww)) and also dreams of making her own. She starts off as many of us started, with drawings that look like nothing special, even ugly, but you can see her progress as the story continues.

This volume is split in two parts. We see her in Elementary in the first part (and also a bit of her future which made me very curious), and then in Middle School/High School in part 2. I have to say I liked the second part more as it really showed how strong she has become. How she isn’t afraid to show her feelings/manga. How she is still trying to draw and read manga (even though her mom doesn’t always allow her to do so which I could kind of understand since her grades do suffer). How she tries to stand up against people. She was really amazing in this one. But I have to say I even liked the mean girl a few times. Sure, she was a bitch, but you did see that she also had a kinder, friendlier side.

In the first chapter I definitely didn’t like the teacher and how she acted towards our MC. Wow, woman, way to shatter someone’s dreams. So what if it isn’t all too good now, ever heard of practising? I hated how mean she was, how rude, how terrible. Why did you even become a teacher if all you do is break dreams.

But I did like the guy in the first part and how he inspired our MC (and later also himself) to just keep on trying.

And later on I also quite like the classmates/friends, as they saw how hard our MC worked, how hard she tried to make something beautiful. I loved what they did for her in the end.

The art is pretty decent, at times quite pretty even.

All in all, I quite enjoyed this first volume, and I think I may just continue as I want to see if our MC gets her dreams fulfilled and becomes a mangaka. And I would recommend this volume to everyone.