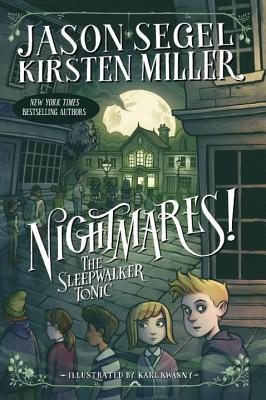 “Dreamless Oblivion Can Be Yours
When You Try
Tranquillity Tonic”

This time no nightmares (at least not like the previous book), but something else that is destroying things. Namely a potion, something that makes people think it is a potion for sleeping as people have had some problem sleeping, but actually it turns people in brain-dead beings. Sleepwalkers. And they were quite creepy. These people are not dreaming, or having nightmares. No, they are just in some weird state. And you can imagine what happens when people don’t have dreams or nightmares… yep, the worlds there are slowly disappearing, vanishing. And it is spreading fast!

So of course Charlie has to help out and solve what is going on. But he is, like the previous book, not alone in this. He got his friends. Alphie, Paige, and at times we also see Rocco. Then there is the annoying brother Jack who is taking quite a role in this one. They help out with everything they can. From simple research to preventing people to take the potion to well, all sorts of things. And Charlotte is also helping with things, I love how she is so involved in everything and how fabulous she is.

Though it did mean that they had to keep the dad away from a lot of things, and even had to stop him for wanting to try the tonic (which didn’t make sense, his wife is an amazing herbalist/can make any potion, and he wants the rival’s stuff?).

I loved that we also saw some characters from the Nightmare world, Medusa seems to be doing fine, though she is very busy. We see Dabney, Meduso, and some other characters and meet some newer characters as well!

Next to the sleepwalker + prophecy + mysterious girls we also have money problems for Charlie’s family. Charlotte’s store isn’t doing too well, and the house is also in trouble due to that. Charlotte tries everything, including try to pitch her story to publishers, but so far no luck!
I am quite happy that they added this to the story, it never felt out of place, instead I found that it fitted quite well. Especially later when we find out certain things.
How everything was solved? I did like it, it was quite a nice solution, and I am happy that people are so sweet towards Charlotte.

We also see more of Ollie, and boy oh boy, that boy is indeed gifted… for getting in trouble. He seems so smart (and apparently gets great grades) but then does stupid things. For instance trying to see how parachutes work by jumping of his house, or eating bath stuff.

But unlike the previous book, I hated Jack, oh so much. I get that he is a little guy, but really, he was just so annoying and I kept hoping that he would get eaten during one of his many trips to the Netherworld. He was just an irresponsible little poop. I hated how he made Charlie feel. I hated how he just did his own thing without thinking about others. I hated how he took the main role, that is not his role, he should just stay away far far away. I just don’t get that everyone just lets him do everything. Oh, Jack did x and y, oh well, he is cute just let him do it and get away with it. sighs and rolls her eyesGreat parenting there.
And then he was oh so hurt because his brother didn’t like him. Gee, I wonder why Charlie isn’t happy with Jack. I can totally understand his feelings. I don’t have a little brother, but I had friends who were good at things, and I was delighted when I had something to call my own. I know I would also feel poopy if one of them was superawesome at my kind of thing. 🙁

Plus the whole forgive and love and rainbow thing at the end with Jack and Charlie? It made me roll my eyes a lot. Was that really needed? Was any of that whole OMG look at how amazing Jack is and you should like him stuff was also urrrrghhhh.

I was also a bit sad that, unlike the first book, there was no real conclusion to the problem presented in this one. Some things are solved, and things are getting better, but we still have the other, very big problem. Something I still have questions about. Given the ending I am guessing the next book will all about those 2.

Like the previous book this book is full with illustrations and I just adore them, though I do think some of the characters should sleep for once, given the bags under their eyes. 😛

I think I have said everything I wanted to say, this was so good!

Hopefully book 3 will be delivered soon, I got it ordered, but Amazon had some problems with sending stuff, I really want to see how various things end, plus I am curious about the twins and what happened to them.