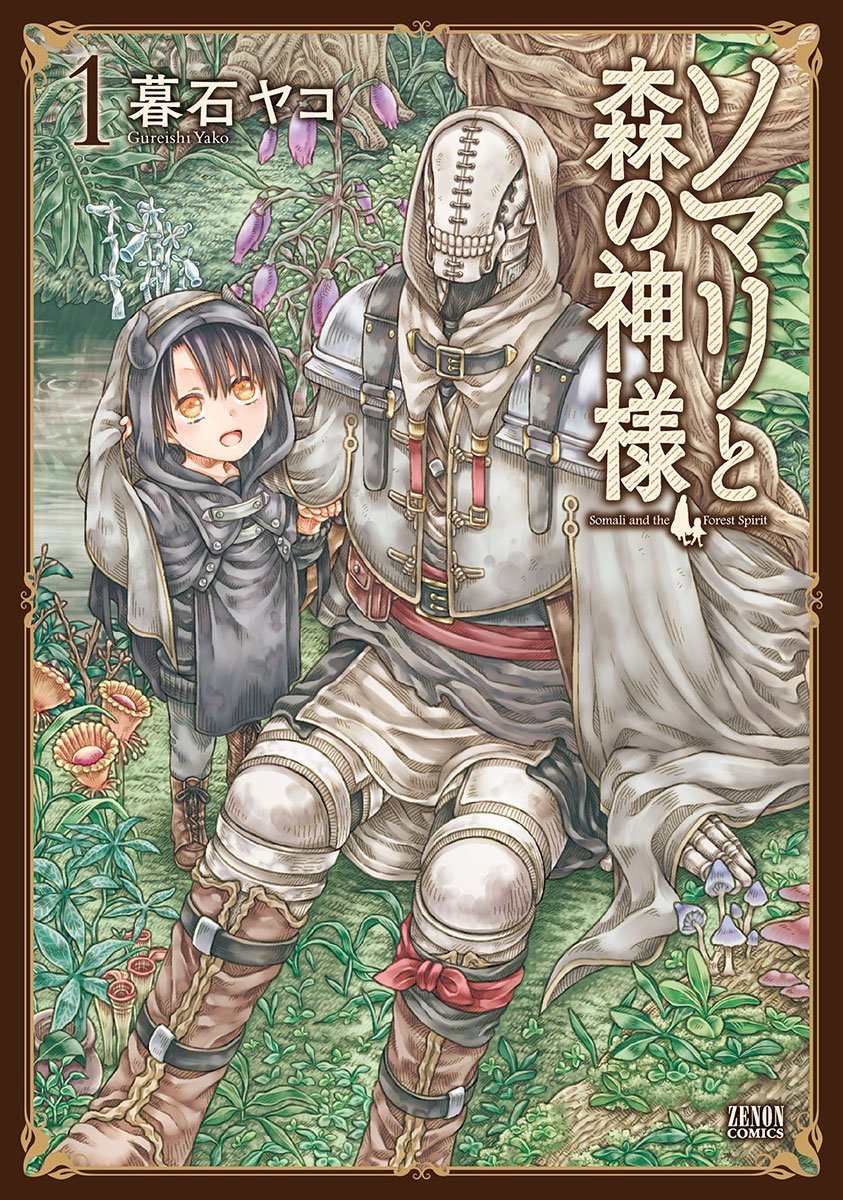 A golem, a child, and a travel through their world, fraught with dangers.

I was attracted to the cover, those details! It reminded me a bit of Hakumei to Mikochi and Mushishi combined. And I can say now that it is absolutely wonderful.

We have two characters, a golem, he is supposed to watch a forest somewhere, but, for reasons we find out in a later chapter he is on a quest to help out Somali, the little child. I really quite liked the golem, he was an interesting character and I loved how much he cared for Somali. Though it made me laugh at times as he is discovering what feelings are and at times he is quite awkward as he doesn’t know how to express himself.

Then there is Somali, a tiny child, I am still not sure if they are a girl or a boy. Everyone is calling them a she/her, but they just look like they could be both. 😛 Thankfully, reading comments from other people they are also a bit confused.
Somali is a human child, and needs to be disguised (though I am not sure how in heavens name that disguise works) as this world is now full of non-humans, who don’t mind hunting for the left-over humans and eating them. Yep. Wonderful world right?
I love how gluttonous the child is. Even if it is a new dish they will try it out and eat as if their life depends on it.

The world is just gorgeous and with each page we see more of this wonderful world. Well, wonderful if you are non-human. As I said humans are hunted and killed. We get a little history lesson quite early on in which we learn that at first the human and the non-humans didn’t know about each other’s whereabouts but then the non-humans were discovered, and so the contact between the two began to flourish, but sadly that didn’t last very long, as people felt distrustful of each other (non-humans found the humans too hard to please for instance, while the humans were being mean about the scales/other strange things that the non-humans had on them) and thus the war started. Given that you know that humans are hunted now, I guess you know how it ended. 😐

Each chapter brings new characters from a little oni who makes medicine to an old man living in a dying forest. With each character we learn something new about the world, about those who inhabit it, and also more about the characters we are following in this world. I can’t wait to see what the next chapters will bring, and if Somali ever will find their parents or if they will be discovered.

The art is just gorgeous, be prepared to squee and get lost in this beautiful world that you really don’t want to leave.

All in all, I found a new series that I will continue to read. And I would recommend it to everyone who is fan of Mushishi or other beautiful adventure manga.