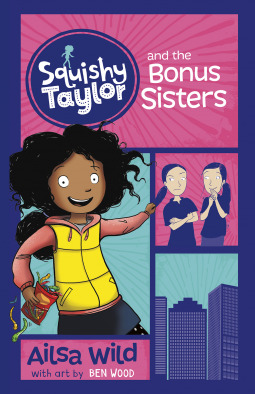 This sounded really interesting, a girl whose nickname is Squishy, and who is a ninja-detective. Plus the cover looked good. I just had to try it out.

A big fat -1 star for the revenge stuff they did/wanted to do on their grumpy neighbour. They made a site, youtube stuff (good job on getting evidence that you are the culprits, really kids are so stupid at times). Not only that, but their revenge ideas are just disgusting and terrible. Spreading dog poo all over his doormat? Not to mention the things they wanted to do. Yes, the guy is a grump. Yes, he is pretty terrible, but to do all this? No, just no. That is just wrong. You are no better, I would even call you worse than he is with his constant complaining.

-1 star for the sister stuff. It just felt all too magical with how they became friends. The first few pages were Squishy talking about how bad they were and what she did to them, and boohoohoo, but then a few pages later she is friends with one sister, and the second one follows quickly after. Sorry, but it was just too unbelievable to me. I don’t buy it.

The John situation was interesting but I feel that it was slightly pushed to the background because of other things, plus it didn’t feel like it was added to make the book more interesting, but more like it was added conveniently for the sisters to find out that they can be friendly towards each other. Which is a shame. I feel like the John plot could have been much more.

There are some illustrations here and there and they are really nice, they remind me of another illustrator, I have their name on the tip of my tongue… thinks mm, ah yes, Mark Janssen. He just has the same style! 🙂

So yeah, I can’t really rate this book that highly, which is a shame, it does have potential to become really good, but it just lacks a few things, and the magical plot conveniences are just too much.