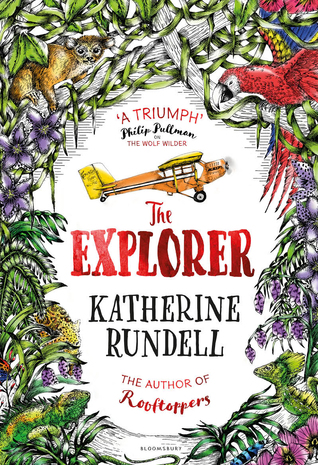 4 kids, one plane crash, it will bring them close to each other as they have to work together to survive and get home.

I didn’t know Katherine Rundell at first, not from Rooftoppers at least. But then I checked out what more she wrote as the style seemed familiar, and I found out that she wrote Wolf Wilder, a book that I absolutely loved. It is a bit weird that they picked an older book of hers instead of a newer one.

Back to the book, it just pulled me in from the start, I just flew through the pages, it was a shame I had to sleep (and I was tired) or I would have finished the book in one go. It was just that engaging. I wanted to know if the kids would be fine, would they all survive (then again, children’s books do love Happy Endings), who was the mysterious man that left all sorts of handy things around, what kind of things would the kids eat, and several other questions and ponderings.

The story also never was boring, there was something happening every page. At times it got more and more exciting as they discovered more things, or when their journey got more exciting.

Fred was a bit hit/miss. At times I quite liked him and how strong and resourceful he was, how he tried to have the group stay together, try to lead them to safety, how he didn’t give up. How he always found a solution. BUT.. there were a few times that I just wanted to throw him off a cliff. Like when The Explorer asked for a favour and he just didn’t want to because he wanted fame and happiness with his father. I get that last part, but the first part? No.

Con, I didn’t entirely like the girl. But later on I could see the whys and hows of her behaviour and I could understand her a bit more. I can imagine she isn’t leading a happy life. I can imagine that she will act fiercely because of that. And she did have some good points. She was brave, strong, and protective.

Lila was an instant favourite of mine, I loved her dedication to her brother, how fiercely protective she was, but also how smart and resourceful she was. She is often the one in the neutral front of the group, and sometimes tried to be the voice of reason.

Max was just annoying, but I can forgive him a little bit due to his age. A little bit, not much. I mostly wished he just wasn’t around. He just did so many things wrong, didn’t care about safety, screamed/cried at moments you should just be quiet. And then there is what happens at the ending.

The Explorer and who he was? At first I wasn’t sure about his intentions, but I saw that he just suffered a lot, that he went through a lot, and that it isn’t easy for him. Suddenly, he has 4 kids at his place, and I can imagine he isn’t all too amused with them. I loved finding out about him, about his past, and I loved seeing him open up to the kids.

The ending, mm, on the one hand I am pretty happy with it, but on the other hand… I would

The book also has gorgeous illustrations at the beginning of the chapters and I just loved and adored those. They were so detailed, and so fitting with the chapters.

I loved that we got a 12 years after part that definitely made me very happy.

All in all, I loved this book to bits and I will definitely buy it to add to my collection (I got the book from the library). Highly recommended!