Toys, they can be fun, but they can also be used for evil!! dum dum dum 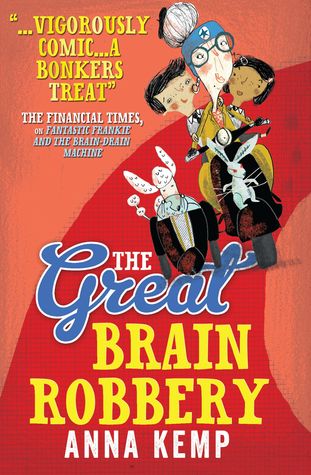 I hadn’t realised this was a kind of sequel to another book until I got to a certain point where they explained about something that happened at their school not that long ago. I was already worried I may not be able to read it further than, but thankfully, after reading this whole book, I can say that I was never confused, instead I was just having tons of fun reading this book and all that happens.

Yes, at times the story is a bit slow, and at times I just wanted to shake some characters (Timmy!) for being terrible (and no even with his redemption arc I couldn’t like him), but mostly I just couldn’t stop reading, I had to know what was going on in that toy store, what the plan was, and who the big bad scientist was (but I figured that one out pretty fast).

Frankie was an interesting character, but I have to say my favourite character was Neet! Yep. The moment she popped up I was very happy. Nothing against Frankie, but I did find him a bit plain/bland. Neet is fun, smart, brave, and I loved how she cared for Frankie and didn’t care that she may also be ignored by the class. She did several fabulous things in this book.

Bonus points to the old couple that took Frankie under their wings. Though it was a bit over the top with what they knew and could do at times. I get the spy part, but that they are able to do so many other things. It just felt like it took away from the story/the scary toys.

The toys acting like the way they did? Creeeeeeppy! Definitely something that would have brought nightmares to me as a kid. The idea that toys just move around? At night? And do all sorts of creepy stuff? Yup, no thank you. 😛 It is a brilliant evil plan though given that all the kids in the world want that specific brand of toys. Though I have to say that the plan they have with the toys, the memories, was quite spooky and it does seem like something straight out of a sci-fi book.

I also liked that the book wasn’t only about toys and taking over the world, but also about bullying, being excluded, terrible teachers (really, those teachers are just the worst), friendship, and some other things. It really made the book even more interesting to read, though also a bit sad at times.

The book is also full of fun illustrations that made the book even more fun to read. It brought the characters to live, plus it made the baddies seem even more bad. Though I have to say I did notice an error in one of the illustrations, see my tweet to understand what is wrong: https://twitter.com/Mehsi_Hime/status/951908689140690945

The ending was definitely fun to read, I am guessing we will get a third book some time in the future. 😛

looks at review I think I mentioned everything I wanted to mention. This was a fun book and I would recommend this book, and I am thinking of getting book 1 as well, as I want to see what happened there and to see more of that evil scientist guy.