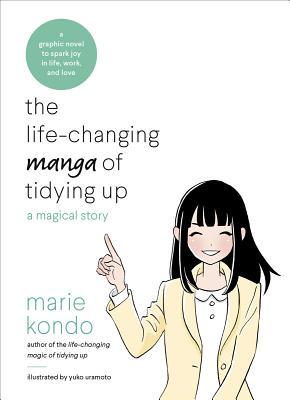 It is time to tidy up your life! Well, if you are such a terrible case as Chiaki is. 😛

I already knew about the normal book, and I even tried it, but it just wasn’t for me. So when I saw there was a manga for the book, I was curious, but also hesitant. I read a sample online and well, I couldn’t resist. The art was fun, the story seemed interesting, and I wanted to know if garbage-dump-living Chiaki could change her way.

Chiaki is really terrible in cleaning/tidying up. I mean, I get that you get a bit sloppy with such a busy life as she has, but to turn your house into a garbage heap? Something out of a hoarders episode? No. I did wonder if her mom/dad/other adults ever taught her to clean, but given everything, I guess not? Thankfully our girl feels that something should change, she wants to invite people over, and also feel welcome in her home, plus not stab herself with random stuff. And that is when she finds an ad and Marie Kondo steps into her life. She will help with everything, though Chiaki will have to do most things on her own, Marie just tells her what to do and how to keep it neat. I quite like that, I was worried that Marie would help with everything and then Chiaki wouldn’t learn anything.

In between the chapters we have little help parts that again explain what happened in this chapter/what Chiaki learned and gives us some more pointers.

There was also a hint of romance, though I do hope that this romance has better luck for Chiaki than her previous romances (and I also hope that she won’t take his hobbies/collect stuff for that hobby, like she did with all her other boyfriends). But I have a good feeling about it. They do match together and it seems Chiaki is truly happy with him.

I loved seeing Chiaki’s home get more and more clean, she really has a nice home… under all that junk.

Plus I am happy that not only did we see Chiaki’s home, we also saw her work, have lunch, and we see her past (boyfriends mainly).

Also, really, why does she keep all the stuff from her boyfriends? I can understand smaller items that have emotional value, but snowboards? Tea stuff? I would throw them out as fast as I can when after a break-up.

I did feel that it was a bit too preachy at times for me. It felt a bit like if you don’t do it the Marie Kondou way then you are doing things wrong. Also the whole your items/clothes support you so you should love and respect them was just a bit too much for a down-to-earth girl like me. No, I am not going to clap my hands or wave my hands to “wake up” my stuff.
Eh, not like I need a tidying fairy, my house is so sparkly my boyfriend makes jokes about it often. 😉 And sure my clothes are not folded as fancy as her way (not really possible due to my closet), and sure we have a lot of stuff (at least that is how it feels to me), but no way I am throwing more stuff away, I already clean enough, and my boyfriend already tells me that stuff can just stay and I shouldn’t clean too much. 😛

The art was also nice, one of the reasons I got this book.

It was a bit confusing though as this is a manga, but it is published the Western way. So as you can imagine at times I felt like I was reading it the wrong way.

But all in all, I really enjoyed this manga, and Chiaki was just a fabulous protagonist, hopefully she can keep it up and doesn’t make her home a mess again. I would recommend this manga.