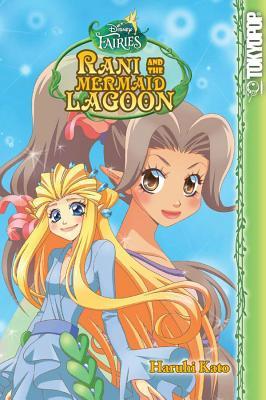 Of course I had to request this book when I spotted it. I am still not a fan of Tokyopop, and I never will be after all the poop they pulled, but I do want to read this manga. But I am thinking that after this one I may just stop reading. Yes, it is a fun series. Yes, the characters are cute. Yes, I am even liking Tinker Hell.

But the story is just so much the same. We have a fairy who is different from the rest (Vidia is very deredere/emo and doesn’t really like to go cute yay yay like the others, Petite didn’t know what job she can do, and in this one we have Rani who is a hero, but is a wingless fairy because of it, and while the others act like they don’t mind they do act different around her), then something happens, everyone gets emotional, our MC goes on a quest/runs away, they learn all sorts of important life lessons, things gets patched up, fairy accepted in the fold. It would just be nice if the formula would change. If something else happened in the volumes.

I did feel sorry for Rani in this one, but I did think she was overreacting at times (not just at the beginning but also during the underwater parts). Instead of just talking to people about how she felt (and not just Tink), or going to the queen and ask for an audience, no she just cropped it all up until it exploded.

The mermaids? I did like them in the beginning, but they show their true colours quite early on. Then again I couldn’t hate them, it is just in their nature to be aloof and silly and not care about things. I am sure they don’t mean it as rude or mean. It was still fun to see them + their kingdom. I am not too sure if I would like living so close to everyone else, but eh, this way you know everyone is safe I guess.

I am happy that Rani was able to open her eyes and see how valuable she is to everyone.

The ending was cute, and I was definitely happy with how they ended it. It was an ending that will be sure to make people go aww!

The art is still pretty good, at times a bit silly (like when they are smiling and their mouths just cover almost all of their faces, or some of the character’s hair).

So yeah, I may try the next book, see if it goes with a different formula, and otherwise consider this series dropped.