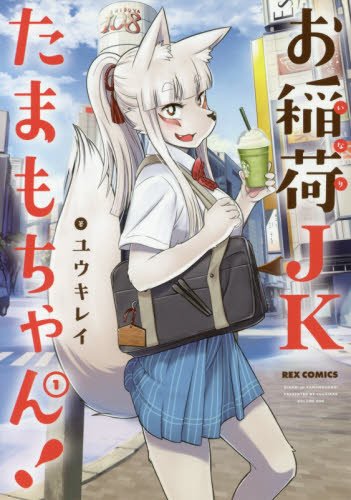 Say hello to Tamamo, a transfer student who is a bit different than other girls.

I could finally read this one! I have been eyeing this one for a while, but never had the chance to actually try it out.

Tamamo? She is actually an Inari from a shrine, she wanted to go to school so badly (no clue why anyone would go to school that desperately, but oh well) that she asks the gods if she could go. She has to promise all sorts of things, but she is allowed to go.

Well, I say transform… and for adults (most of them) and machines (cellphones) she looks indeed human… to the rest of the school however she looks like a foxgirl. 😛 Yep, she is terrible at it. And she never notices, well, yet, maybe in later volumes she does notice and gets flustered (or change into a statue, yes, that happens).

What happens next is that she is getting offers left and right, people are praying to her (though she doesn’t notice), if someone wrongs her they get cursed (like the annoying teacher who keeps eating Tamamo’s food). Though I have to say that the last thing? She doesn’t know she is doing it. This in contrast to her older sister Tenko. Who knows she has powers and uses them to the fullest. 😛

The classroom even gets called a shrine due to Tamamo. Yep. Tamamo is very popular with everyone (some people more than others though).

I love how a certain group was trying to make pictures of Tamamo as a foxgirl, but they never get it right (again, the whole machines will show Tamamo as a girl thing). But they never give up. Which is quite dedicated, most people would just give up, but these guys just keep on trying in various ways.

It was also oh so much fun to see Tamamo discover the human world (food, busses, anything really).

Oh, and how she became friends with two girls (well, one specifically) had me in stitches. Poor girl.

The art is pretty good, I really like how Tamamo was drawn (and how she looked as human girl).

I can’t wait for the next volume. Hopefully it will be just as fun as this first volume was. Oh, and of course I would recommend this manga to everyone.