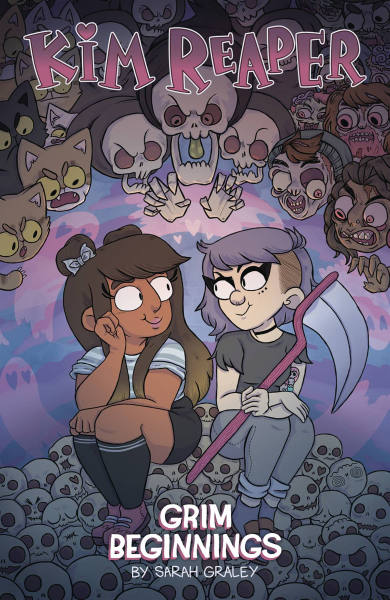 I have been eyeing this book (and well this comic) for a long time. Ever since Sarah posted bits and pieces of it, told us about it, showed the comic issues. I knew I wanted it. But I wanted to wait for the bundled volume to come out as it isn’t easy to find the issues.

This book is about Kim, but also about Becka. We see things happen from both perspectives, and I loved that. We see Becka (whom I loved instantly) and her crush on Kim. Little could that girl have expected that her kick-ass girl crush was a Grim Reaper. 😛 I had such a laugh when she saw Kim go through a portal, and instead of screaming, just started making pictures for internet usage.

After that the story really starts. Instantly we find out that Kim isn’t just your normal average goth, oh no. To fun her college, rent, and epic clothes she took a job as Grim Reaper. Yup. That must be the best job ever.

You won’t be able to have a breather, believe me. It will be a rollercoaster of cats, creepy Reapers (with an enormous bunch of egos), parties, skeletons, and lots of sparks flying.

Because these two girls are in lurrrrveee! I wasn’t sure at first if Kim was also in love/liked Becka (as she first seemed very put off by Becka’s kind of stalking), but that all changed when she was so sweet to go on a sort of date with Becka to show her the Grim Reaper’s powers. And especially later it got more obvious as she has to save her girl from certain doom (stupid Grim Reapers (not Kim)). The romance between was really cute, and I liked that Sarah Graley added some more extra to it by having Becka not approve of Kim’s powers. Or well, at least not the whole reaping thing. And it was also not much of a disapproval if more of a worrying thing. It is a dangerous job, and Becka would like many more dates and many more romantic events.

Becka and Kim couldn’t be more different, though Becka also shows she can kick some serious butt if the need arises (never mess with a girl who works in a bakery).

The art was fabulous, I just adore Sarah’s style of drawing.

It was just a shame that the ecopy I had didn’t have that high definition on the images. The text bubbles were clear and HD, but the rest was a bit fuzzy. Which is a shame. It is not the first time I have noticed this happening when I get a copy from Netgalley.

All in all, I could rave about this one for a long time, but I think I have said what I wanted. I will just say that I want a second book! I want more Grim Reaper adventures, more romance, more kisses! Give me more Becka and Kim!