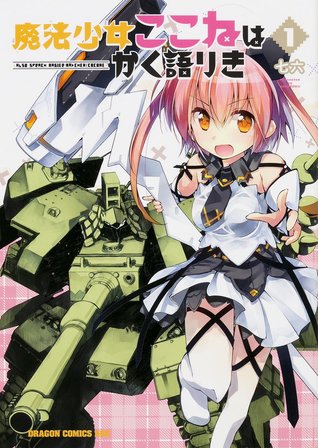 “I met a Mahou Shoujo; and so began my story–“

I was instantly interested in this book when I saw the cover, and then I read the blurb and wanted to read this one even more.

Welcome to a world where Mahou Shoujo exist, sadly, they aren’t praised or loved. Oh no, they are treated as a calamity due to an event that wiped out the Kantou Region. Which caused not only the death of millions, but also caused Japan to be isolated from the world (no one wanted all those magicians/mahou shoujos) and have anything Mahou Shoujo be banned (be it media or the real deal). Here is a girl who loves Mahou Shoujo and feels that they are not as bad as they are made to be (mostly due to her watching anime, yes, illegally of course).

She gets a chance to become a Mahou Shoujo when she, on her way home, encounters a girl, a mahou shoujo. That girl(named Hoshi) is captured and Kokone (our MC) gets to be a real Mahou Shoujo. And she is on a mission to not only stay hidden from military, but also save Hoshi.

This first volume doesn’t really have a lot of saving (save for the first part when she just becomes a Mahou Shoujo), but I feel that, with the addition of more girls + the appearance of certain adversaries we may see some more saving in the next volume.

Plus I just had too much fun laughing at Kokone talking to the grimoire, trying not to make everything come to life (as that is a power the grimoire/she has) and failing miserably. Though, granted, it did help her later on when she had to get out of school to face her new enemies. 😛

Kokone was pretty great, I always love it when a girl (or boy, yes, boys also can become mahou shoujo) who loves mahou shoujo gets to be one! Though generally they are a bit more accepted by society than in this one. I love that our girl takes lessons from the mahou shoujo from her anime/manga and applies them to real life situations (which had me laughing during one scene in particular). I am sure she will be a terrific mahou shoujo. Plus at least she got to keep her underwear when transforming (which was something she really wanted). 😉

It was a bit silly that Mahou Shoujo were so close to her without her knowing it, but that is manga logic for you.

The art is also really fun and quite pretty. I just adore the expressions on the characters faces and the designs of the mahou shoujo outfits.

Yep, I will definitely continue reading this one, I want to know more about this world, about the disaster, if our MC will find and rescue Hoshi, the battle between those new mahou shoujo, and more!