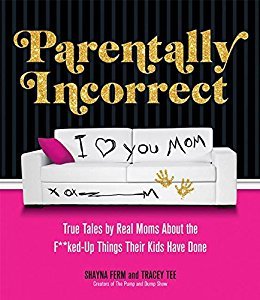 Um, what the hell did I just read? My expectations: Hilarious short notes on hilarious things kids do (things like colouring the walls, saying some weird things, maybe some awkward farts). What I got: Poo, pee, poo, pee, penis, vagina, disturbing stories of kids touching their parts and licking it (yes, really), sex, and more poop. There were a few stories that had me in stitches, but generally I was either grossed out or very much disturbed at what the kids did.

It must be a culture thing as well, as I have read enough Dutch/UK-English parenting books, and none of them focussed so much on poop, pee, or sex. Sure, there were some stories in those books, but WAY less. And also WAY less cursing.

I am sorry to say that this book severely puts me off ever getting kids, and that I really needs some bleach because dang, that was just disturbing and disgusting to read. Bah. I feel very terrible for reading these things.

And yes, I get that this Fucked up things kids do, but this was way beyond that. I even discussed it with other people, told them examples, and they agreed that it wasn’t fucked up anymore, it was way more than that. And yes, they also wanted some mind-bleach.

Also it would have been nice if they just had typed over the notes or at least provided a transcription of the text, as I just couldn’t for life of me, read quite a few of the notes. 😐

One thought on “Review for Parentally Incorrect”