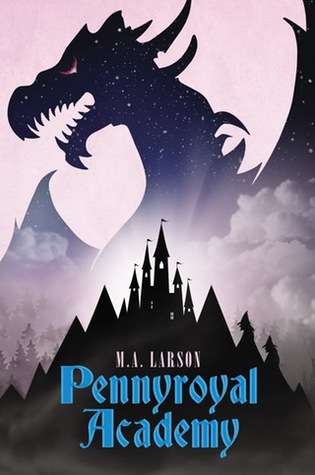 “All of it pointed to one simple fact: to be a princess was to battle witches.”

I have been meaning to read this book for a while now, but never had the chance to do so, until the day I found this book at a fabulous price at a book store (I just love finding English books). They also had book 2, but I wasn’t sure if I would love this one (again, I have a 4+ stars requirement for my bookshelves these days), so I left it. I am currently still kicking myself for not bringing it with me. Now I can just hope it is still there when I go next week on Saturday.

Note: While this review may be a bit long, and I would love to discuss a lot of things, due to it being pretty spoilerish I will just keep it basic, or only lightly touch upon the subject. 🙂

This was just too much fun to read, the first 50 pages were a bit slow, and at times I got tired of the descriptions, but then I just couldn’t stop reading it. I just flew through the book, I wanted to know all about Evie, about her past, about the witches, if she and Remington would get together, I wanted to see more training/battles, I couldn’t wait for the ball, and there were a ton of other things I wanted to read.

This book also gave me serious Madoka Magica vibes. Not only because of these reasons: girls who have to fight witches, they have to be true princesses (or those who have the true princess strength). The witches are truly evil, vile beings that are cruel, wicked, and terrible. Then there is something near the end, which I won’t spoil. Then there is one girl who is destined to do great things, the Warrior Princess. Next to those reasons there was just also the atmosphere that felt so much like Madoka Magica. The despair, the fear, the angst, and some other things. The only thing that missed and would have made it complete would be a Kyuubey character. 😛

Evie/Eleven/her other name, was a wonderful character. I was really curious about why she was such a blank slate in regards to her past, but also with that she didn’t know a thing about what the school was actually about, about the past princess, about the whole folklore of the place. I am really happy with how the author handled this, how they didn’t rush it, instead offered us bits and pieces of Evie’s past, showed some more of her dragon family, but also later her other family. It takes most of the book before we learn all we can about Evie. I love that! Oftentimes authors will rush through the backstory and then be done with it, but not this author! Thanks!

Plus it was great how brave she was, how she never gave up (though well… but I can forgive that time), and how hard she learned (instead of just letting it go by, she started studying and reading all the books she could read). This is one girl that is destined to do great things! Plus, thanks to what she encountered in the first part she knows how scary witches can get. A lot of girls haven’t had first-hand experience with witches. They know the terror, but they don’t know how scary these witches really can be.
I also did feel sorry for her, not only for her past (and what we learn), but also the bullying by Malora, Forbes and his creepy behaviour (dear Lord, that guy just screams CREEP ALERT).
Well, I can keep going on about this kick-ass girl that I love, but I think people get that I love her now. 😛

Remington, ah, the knight in shiny armour. He was so sweet, nice and kind. Sure, I had to get used to him a bit, but later on? I just was hoping for many moments between him and Evie. He was kind and caring, but I also loved that he didn’t mind making a joke (like with the ball), and he also had something else going on that had me laughing. Yep, this guy grew on me. Though I have to say I wanted to kick him in the nuts during one event in the book.

Maggie, Demetra, Anisette? The friends of Evie? I loved them, they were so sweet and fabulous. Whereas a lot of the girls were dividing off by if you were royal or not, these girls stuck together and mixed everything up. They showed what really makes a princess, to be sweet and kind.

The training? The school? Perfection! I just loved everything about it, and I wouldn’t have minded participating in the training and the lessons (especially the lessons and the stories about the princesses and what they all did). Plus I am happy that we also saw the princesses and knights compete, help each other, or had training together. So fun!

I did have a laugh at the names of the instructors. I just couldn’t take them all seriously, especially not in the beginning when we just learn about them.

Poor Basil though, but I am glad that they choose to accept him and that he also participated in everything and did his best for his fellow princesses.

The witches and seeing them get closer and closer was frightening. We see the destruction and loss get closer to home. It broke my heart for those girls who now have no home to go back to, or went home and are now potentially lost forever. 🙁 The witches were properly scary, these are my favourite witches. Sure, it is nice to have a cute witch at times, but this is much better.

Malora? Boy, oh boy, I never liked the girl. She was a terrible character, but I have to say I sympathised with her later on.

The ending? IT WAS AMAZING! Really, it was just the best ever! So many new things are learned, then there are some things that happened that had me on my seat. Boy oh boy.

So yeah, I would highly recommend this fun magical book to everyone, and please pray with me that the second book is still waiting for me next week on Saturday!