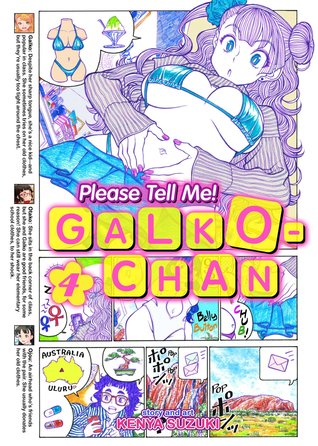 Movies, questions, hilarious situations, friendship, and more! Galko is back in the 4th volume.

I finally had the chance to buy this volume, and it was just too much fun to read!

I have to say I miss the questions. Sure, there were questions, but I feel that whereas they were very abundant in the previous volumes they get less and less with each new volume. Plus the questions are getting pretty bland, not as exciting as they were in the first volumes. I do hope that the author will go back to better (and more) questions in the next volumes.

We also have movie talks + another story about a movie. I really did like that they were added, especially considering that Galko loves movies and often gets to school tired as she watched tons of them during the night. Hopefully we get more of these movie talks in the next books.

I did like that, once again, we don’t only see Galko and her friends but instead see other characters as well, like Galko’s sister (who gets quite a big role in this one) or one of Galko’s classmates. I loved the chat Galko’s sister and her friends had at the cafe. But also the vlog thing was just brilliant. I wouldn’t mind seeing more of that vlog. The questions were hilarious and great.

And Galko… I know you want your dressing for breakfast, but please just put on some clothes before you head outside. 😛

The art between the stories/before the stories was already pretty sexy, but I feel it gets sexier with each volume.

Ah, and I kind of gave up on reading those little character things on the sides of the pages. I already didn’t like them that much in the previous volumes (they are distracting and often not that interesting), but I just didn’t want to read them in this one.

I can’t wait until August when Volume 5 comes out. Squee!