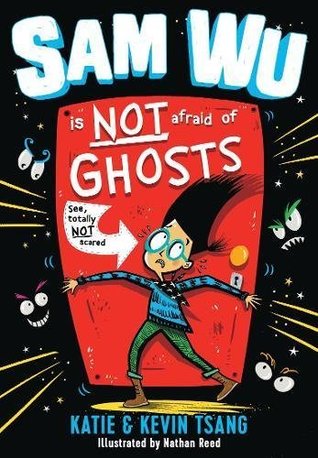 Say hello to Sam Wu, a boy who is NOT afraid of ghosts, or snakes, or cats, or… well. 😛

Note: This review may be a bit chaotic, I really loved and enjoyed the book!

So I was in London last week, and I spotted this book being promoted at Waterstones (still amazed at how normally priced the books are there in comparison to the one Waterstones we have in my country) and wanted to take it with me (especially after reading some pages of it). Sadly, I couldn’t. I already had bought 2 books + I had several souvenirs that still needed to fit in my luggage. But as soon as I got home I bought the book on Amazon and thankfully it got delivered superfast!

This was as fun as I had hoped! Though Sam is really a chicken about anything. 😛 Though I did like how he tried to face his fears, how he tried to repel the ghosts (though I wouldn’t recommend doing that again as it really stinks), and how he tried to show his friends how awesome he was. I loved his dedication to the space show (and wish I could watch it as well), he was just so sweet when he tried to get his friends to understand his love for the show.

The book starts to tell us what happened that was so horrible. Well, it is pretty horrible, and tons of embarrassing. I can imagine that he doesn’t want to go to school any more, I know I wouldn’t have gone either. 🙁 Then again, he did go into that machine, so in a way that was brave of him. It is just a shame his body betrayed him, otherwise he would have come out a hero.

The ghost (and what it turned out to be) was just the best. I had a suspicion it would be that, and was happy to see it confirmed.

It was great fun to see Sam’s family, and learning what Sam’s true name was.

I just adored Sam’s friends, especially Zoe. They are the very best friends one can have. They are there for him when he needs it. They try to help out with the ghost and the snake. They like to try out new things (like the food, though I didn’t like how rude they were about it at first).

I am still not sure what to think of Sam’s sister or the cat. On the one hand the sister is pretty kick-ass, but on the other hand I wish she would show some more respect for her bigger brother. And the cat was just annoying for most of the book, though I had a laugh near the end and what the cat did there.

I have to say I didn’t expect the bully to be so tiny. When we first read about the bully I had expected some bulky rich dude, but instead it is just a tiny little rich kid spoiled to death. I didn’t like the guy at all, but I could see that he is also not as tough as he wants people to think he is. 😛

I was also worried about Ralph’s sister, would she be as bad as her brother? But, thankfully, no.

I am not too sure about him getting a snake and his parents allowing it. He is so afraid of it, that I wonder if he can care for it properly. A snake still needs love, and if you are just going to let it in the terrarium or dodge it every time it moves, I am sure the snake isn’t going to be very happy. Later on he did show that he is getting over his fear for the snake, but still I wondered if it was really a good idea to allow him to have one. Maybe not until he really learns to care for it.

Lastly, I want to say that I love how the book was full of fun illustrations, arrows with texts pointing at parts of the story, and all the other things, it made the book even more fun to read.

Yep, I had tons of fun, and I am very happy to see that we will be getting more Sam Wu adventures, I can’t wait for it to come out! <3 I would recommend this book to everyone!