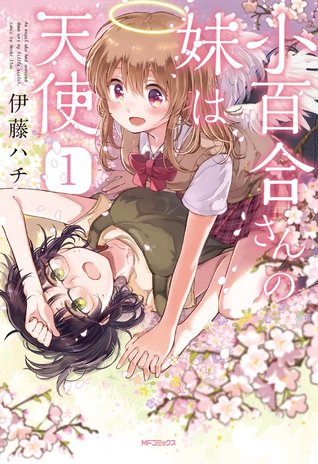 Two sisters, one an angel. One in love, the other just sees her as a sister. How will this end?

This was cute (as I already had hoped given the cover), but the little sister is superannoying. Really girl, just no. Your big sister clearly doesn’t see you as more than a little sister, stop butting in with your couple stuff. 😐 Stop being so creepy about it. I get that you love her, I get that you made a promise (what is it with Japan and childhood promises of love and marriage?), but really, don’t you get that you sister just did that back then because you were a tiny thing and she didn’t want to hurt your feelings? Don’t you get that it is just no, no and no to be together as sisters. That it is impossible. Do you have to be such a bitch/yandere about other girls who come close to your sister?

I would rather see Sayuri go together with the cute coworker. 😛 They match so well together. I have to say I didn’t see it coming when we learn something about the coworker. Though later on it is unmistakable. Like the author decided, oh the secret’s out, let’s just go for cuter/more x.

Also why is the little sister an angel? Why can only a few people see this. Did she die? In that case, how does the mom not know about that? (I would think she would know when one of her kids died, even if she hasn’t seen her for years.) Or anyone for that matter? It is a bit confusing. I do hope that we will find out more as the story continues (not that I am continuing though).

The art is quite lovely, the style reminds me of other manga that I read (which is totally OK as I love that style).

But I won’t be continuing this one. Maybe one day I will check the ending of the series when that is out. Or quickly go through it to see if there is more about this whole angel thing.