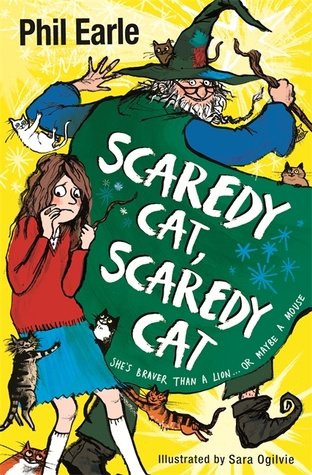 Scaredy Cat, find your inner mountain lion and let her rip out a roar that will deafen the masses. 🙂

I was delighted when I found this book at Library #1, it is always fun to find English books in a mostly Dutch library, especially when it is a book in a series/author that I like. I couldn’t wait to read what was going on at Storey Street in this one!

I have to say I am a bit sad, I hadn’t realised until the acknowledgements that this would be the FINAL book in this series! Noooo, I am sure there are so many more stories to be told, I don’t want this series to be over just yet.

This time our main character is a girl named Kay Catt, she is immensely scared of everything. She is so timid that the word timid needs a new description in the dictionary. I actually felt sorry for the girl. She didn’t seem to be enjoying her life that much, only times she seemed to enjoy it was when she could escape it to worlds in books or movies. Mostly wizard/fantasy stories.
But then again, if I had a dad like Kay? I think I would also have turned in a nervous wreck. More on him later.
When an old man, who looks like a wizard moves in one of the empty buildings in the street, Kay is immediately over the moon. He looks and acts like a wizard! She wants to know more about him. And she quickly finds out a ton about him, but also eventually learns the reality of his situation (which was sad, but I was also shaking my head that Kay really thought the guy was a wizard, sorry, maybe this is a spoiler, but given that the series is not fantasy, I don’t see it as a spoiler).
Thanks to the old man though she finds out that deep inside that scared girl is a mountain lion, who wants to come out and ROARRRRRRRR! Yep, that is right, this girl has the genes of her mom and dad (well before everything happened) and she just needs to let it out.
Kay really got better as the story progressed. At the beginning I found her slightly rude and eh, but later on I liked her more and more. With the ending she was a fantastic character. That she would that for someone she just knows, that she would go so far, that is just amazing!
Also I just adored that she had a staff/wand.

The dad. Sorry, I get that he lost his wife, that he doesn’t want to lose his dear girl, but this is not the way to raise a kid. You can clearly see how Kay is and how her dad’s behaviour is affecting her. Any kid would go totally weird with a dad who talks about ways to die, cuts off corners of everything even the round things, is so overprotective that the girl isn’t allowed to do anything. I just wanted to shake him for turning Kay into what she was for most of the book. Again, I get that his wife that, which is horrific, but I am sure your wife doesn’t want you to become a paranoid wreck. 😐
I did like him more with the ending though. But still it didn’t erase all he did in this story and before that. How he hurt Kay with his behaviour (yes, I would call it hurting, as I am sure she wouldn’t have turned out so scared and timid if she had a strong dad who was there for her when she needs it the most).

I loved Wilf, though he was a strange one. 😛 But he is an amazing human, the things he does for the kittens and how he cares for them so much that he forgets everything else. But not only that, he is selfless, helping out streets and stores when they are infested by mice. He just boogies around with his mice and helps out. Plus he really brought a new side to Kay, and also showed Kay’s dad that things had to change.

The ending was great, I just loved how everything was tied together. Everything came together. I loved the decision that Kay’s dad made, that is totally sweet of him.

Of course the book also has terrific illustrations by Sara Ogilvie! The way she drew all the characters was just perfection. Also their transformations (Kay and her dad).

The story was really fun to read, I just flew through this book. It was funny, it was sad, it was boogie woogie (cats dancing, absolutely brilliant). I would recommend this book to everyone.