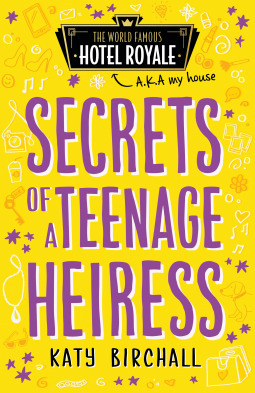 Welcome to Hotel Royale, the hotel where your dreams come true!

I was superduperexcited that there would be a new book by Katy Birchall, I just ADORED her The It-Girl-series. Imagine my delight when there would be a new series, this time taking place at a hotel, a famous one at that! Featuring a girl who is going to be growing into a sweet, hardworking, smart character as the story goes on.

Yep, I have to say that I at first didn’t like Flick, or Felicity, that much. She was bratty, cared more about herself or her little dog Fritz, she was mean, didn’t get the most basic things in life. Yep, I wasn’t a fan of the girl that much, but then the story really started, and I could see her changing. She was finding out that working hard wasn’t that terrible, that the hotel was actually quite interesting, and several other things. Sure, she still has some moments that made me roll my eyes (like when Ella isn’t talking to her, she doesn’t have friends, but then thinks that she will have people flocking to her as soon as she does that vlog with the popular guy). But all in all, at the end of the book I actually loved her, was rooting her, and wanted to see what cool things she was going to be doing next.
And she showed a lot of promise for whenever she has to take over the hotel in the future. She shows that she can delegate people, that she understands how the hotel works, and is able to make the guests very happy (as she did for Sky, but also that one guest).
Sure, it all started for her as a way to get back in the good graces with her mom, but I could quickly see that she was having fun.
I would have loved seeing her do a vlog, but I guess we will be seeing that in the next one, or at least I am hoping that.

Fritz, the little dog, was adorable, and I wouldn’t have minded seeing some photographs of him in one of his many outfits. He did seem a bit spoiled at times, though I can imagine why given with how much love he gets from everyone.

The mom, well, it was a bit hit and miss at times. I can imagine it isn’t easy raising a kid on your own + also all the whole work that comes with owning a hotel. But at times she was just a bit too much for me. But, just like Flick, I have to say I liked her much more near the end.

Cal. Never liked him. Not at all. He seemed pretentious, annoying, and at times mean. Sure, Flick also isn’t the easiest to deal with, but still I just got a bit tired of how he acted. I wouldn’t have minded if he had disappeared halfway in the story. Maybe it is also due to how Flick looks at him. We see the story and the characters, through Flick’s eyes. I am sure that also coloured my views. Maybe if we had seen the story through someone else’s eyes, or even Cal’s, maybe I would have liked him much more.

Sky, or Skylar. Our famous popstar and I have to say I was at first worried how she would turn out to be, quite often famous people are snobbish. But thankfully Sky is just amazing, fun, sweet, daring, and great! I loved how she took Flick under her wing, became fast friends with her. It was fantastic how down-to-earth this girl was. How she knew she was famous and could probably get and do anything she wanted, but didn’t let it go to her head. She was so normal, and I loved that. I was a bit surprised at her choice of love interest.

Grace! Squee! I just adored this silly, weird, awesome girl. At first I was worried she may just turn out to be something else, but I shouldn’t have worried. She quickly became one of my fav girls in the story. I just adored how she stayed true to herself, wasn’t afraid to step up for a friend (though it took some motivational advice from her brother), and I laughed so much at how she reacted at times (girl, lying on the floor may just not be the best idea, especially not at a party).

Ella, the quintessential mean girl. I just knew from the start this girl was mean, and she quickly showed her true colours when she ignored Flick on multiple occasions, only really used Flick for her popularity, and I could go on. It wasn’t a surprise when something happened and her meanness went a few levels up.

Olly, the cute boy, and I am definitely rooting for him and Flick to get together. He was just so sweet, talking or texting Flick when she had problems, or when he wanted to give advice. Aww! Also brother of Grace (and I just had a laugh at Grace’s reactions in regards to her brother’s love life).

Then there are a ton of other characters, Chef, Audrey, Matt, Jamie, Sasha, I could go on. I quite liked them and they made the book even more fun. Plus they showed more of the hotel and its workings.

The hotel was fabulous, if only it really existed and if only I was rich enough to visit it then. I adored the descriptions of the place, how grand and fabulous it was. And also read about the history of the place (ghosts, family, and more).

Also yeah for a cameo of Anna from It-Girl and also several mentions of her father. cheers

One thing I would have loved to see would be names next to the text messages. I could understand who Flick was, but the one who was texting her, or who she texted, was at times unknown. Well until a name was dropped. Though Grace’s texts were quite easy to discern. 😛

I just couldn’t stop reading, I just had too much fun, and I was so sad when the story was over. If only it was longer! But thankfully there will be a second book. is excited and can’t wait

I would highly recommend this book to everyone. A fun protagonist who will grow and learn, great side characters, a wonderful hotel, and well, just read this book already! Go go!