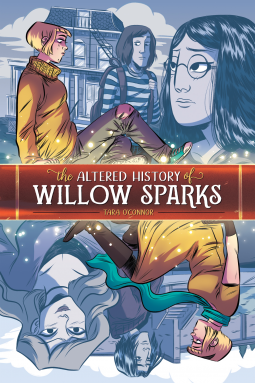 “What if you had the power to rewrite your life?”

Yep, I would definitely rewrite some parts. Just like Willow (and also Georgia) I was bullied immensely in school. I know I wouldn’t be able to resist the chance to rewrite things, even if it meant that I would be in trouble later on. Even a few moments of bliss years ago would save me the a few shitty feelings I still have today. 🙁 I know the consequences (I was wondering why Will never saw that there would be consequences, nothing comes for free), but yes, I would still do it.

I hated the bullying, it was terrible. Throwing a whole load of balls at someone? Especially aiming at their faces? Dunking them in toilets? Other crappy things? And I despised the teachers, they are bound to know something is going on, but none of them react. That one teacher (I am guessing she is at least) should have done something during that dodgeball game. Instead she just did nothing and stood there. 😐

But I also hated Will at one point. When she dumped her best friend because she had the in-pass to the popular group. I do understand that she is happy it is not her, but this is also your friend.

I like the idea that there is a whole library (libraries I should say) that hold everyone’s life books. It is a bit dangerous to have such a library, one wrong person can alter so much. But even with that there is something magical about it all. That you can see life change, that books disappear and appear.

Bonus points to the fact the Georgia and Will loved to read. That Will worked at the library.

The art was pretty OK, it was quite pretty at times, though I didn’t always like the facial expressions/faces of the characters.

But all in all, I would recommend this book to people. It is a really good read.

2 thoughts on “Review for The Altered History of Willow Sparks”