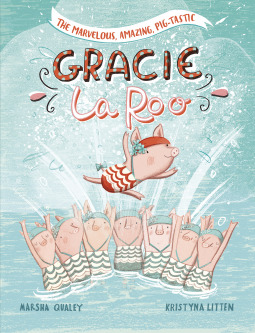 I was under the impression this book would be one story, but instead it is 4 stories in one book.

The first story is Gracie La Roo at Pig Jubilee. 3 stars from me. I quite liked the story, however… it did feel like I missed a previous story or a part of this story. We start smack-dab in the training for some big event. It just felt jarring. I wanted to root for the girl, but I never really saw her train other than that one failed training we get into at the start. Plus I was a bit annoyed that she would just walk away from her precious bag like that. OMG I see a star, I need to go and get a picture/autograph. forgets bag, gets in a tizzy The ending was also predictable. But it was still fun and creative to see a swimming/ballet pig.

The second story is Gracie La Roo on the Big Screen. 4 stars. I quite liked this story, plus I loved how Gracie tried her best, how she tried to be a peacekeeper and how she eventually found a solution that not only made the lead star happy (very important and I just didn’t get why the director was being such a butthead about things), but also gave Gracie a chance to shine (which she deserve, they really should have told her from the start what the plan was). The movie idea was a really fun one, I wouldn’t mind seeing that in the movie theatres here. Merpigs? Pirates? Crazy stunts? Sign me up!

The third story is Gracie La Roo sets sail. 1.5 stars.
I hated the captain. Instead of taking action against those passengers who threw things at the performers she grumbled that people should be happy and that if Gracie and her team didn’t do it their performances would be cancelled. Whut? What is wrong with this captain?
I also didn’t get why people had to be so crappy about the show. Oh no, the pool is closed for 30 minutes or so, how terrible. Imagine you can’t swim for 30 minutes to an hour a day. The horror. Of course the logical action is to throw stuff at people and endanger them. rolls eyes
The ending was way too predictable and silly. OH, and now people suddenly don’t mind it? Really? That is all it took? snorts

The last and fourth story is Gracie La Roo goes to school. 3 stars.
Or actually she goes to her old school to teach a class and give a speech. When I saw the title in the beginning I thought she was finally going back to school after a long tour around the world because of the medals she won. But instead it was something different.
The principal, bleh. She clearly doesn’t get kids. Speeches and lectures and classes are supposed to still be fun. It is important to teach kids, but if there isn’t any joy, happiness or fun in it, kids will just not listen/not be interested.
The coach was also bleh. What is up with this school and their teachers? sighs
But I loved how Gracie showed him that her sport is really serious. Go girl! The ending was also fun, and I loved how Gracie just took the matters in her own hooves and just did what she felt comfortable with! You go girl!

The book is also filled with illustrations. The style is really fun and cute (though I had a laugh at how huge the snouts are on the pigs), I quite liked that the illustrations were all in colour. I am so used to having a whole book with just black/white illustrations that this is a breath of fresh air.

All in all, I really liked this book. I wouldn’t mind reading more Gracie La Roo stories.