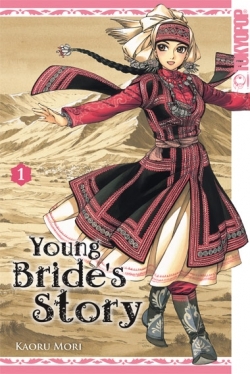 The day to day life of Amira and the boy she had to marry. All about his family (her new family), their life together, and more.

I read a chapter of this one a few months ago and instantly fell in love with the art, with the characters, with the setting. Then again, I shouldn’t have been surprised, I just adore Kaoru Mori’s manga. 🙂 And then for my birthday I got this volume so I could finally read it entirely.

This was just a stunning manga about an arranged marriage between a girl and a boy. I just loved seeing their families, their cultures. How Amira stood out from her new family, but also quickly was accepted into the family (which was proven later even more when Amira’s old clan came to pick her up again and the new clan wasn’t about to let her go). In the end it was as if she had been with that clan for ages instead of the short time. She taught them new things from her culture, and they taught her how things worked at their clan/culture.

Amira was a fabulous character. She is strong, not afraid to try things, caring, sweet, and I just loved her instantly. She is quite reserved throughout the book, but at times she shows a whole other side which I really liked to see.

Karluk? It took me a bit to get used to him, but later on I found him quite a nice boy. Who really cares about his wife (as seen when he just hops on a horse to go find her). Plus he isn’t afraid to try out the new foods that she knows so well, but he has never heard of. I can imagine it must have been a bit strange for him to get a wife so early in his life.

I also like that we not only see Amira/Karluk’s clan, but also saw them travel to Karluk’s uncle’s clan (and it took them quite a bit to find them as they move around). I really love seeing the world these people live in and I hope that we will see more of it in the next volume.

Sure, I felt weirded out at times given that Amira is 20 and her husband Karluk is 12. I get that it is probably very normal for their culture (well, ish, given the reaction of Amira’s clan later on), but I just felt a bit weird about it all. Though at times I also did think it was very cute, they did seem to match together very well. Plus, this is an arranged marriage, but it seems that they both didn’t mind and both seemed very happy to be together. I had expected some more struggles, especially given the age of Karluk, but he seems very mature about everything (though I laughed a lot when Amira went naked or pulled off most of her clothes and his reaction to it).
Especially later on I was just awwwing at how adorable they were. Amira was so protective and caring when Karluk got sick. Aww!

The art is just absolutely gorgeous, the details are stunning, and at times I just couldn’t stop looking at the pages. <3

All in all, I would highly recommend this book. You will be stunned and amazed and just adore the characters! I will definitely be buying the next volume (and maybe another one) soon.