Welcome to a brand-new Waiting on Wednesday. I am still sick + it is Valentines Day so I am keeping this one short.

A girl, cosplay, a secret identity (involving our MC’s twin brother), D&D (not much for me, but still sounds fun to see her get drafted into a campaign), and then there is that cover which reminds me of those paperdolls I had when I was kid that you could give clothes and other fun accessories. Plus it seems there is some romance, and I am curious to see how that will end up (given that Lincoln may just think that it is a guy flirting with him, cue awkward situations). 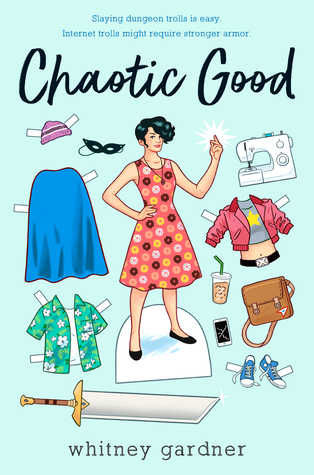 Cameron’s cosplay–dressing like a fictional character–is finally starting to earn her attention–attention she hopes to use to get into the CalTech costume department for college. But when she wins a major competition, she inadvertently sets off a firestorm of angry comments from male fans.

When Cameron’s family moves the summer before her senior year, she hopes to complete her costume portfolio in peace and quiet away from the abuse. Unfortunately, the only comic shop in town–her main destination for character reference–is staffed by a dudebro owner who challenges every woman who comes into the shop.

At her twin brother’s suggestion, Cameron borrows a set of his clothes and uses her costuming expertise to waltz into the shop as Boy Cameron, where she’s shocked at how easily she’s accepted into the nerd inner sanctum. Soon, Cameron finds herself drafted into a D&D campaign alongside the jerky shop-owner Brody, friendly (almost flirtatiously so) clerk Wyatt, handsome Lincoln, and her bro Cooper, dragged along for good measure.

But as her “secret identity” gets more and more entrenched, Cameron’s portfolio falls by the wayside–and her feelings for Lincoln threaten to make a complicated situation even more precarious.