Welcome to the Blog Tour for Going Places by Katryn Berla! A book about growing up, about friendship, and much more.

For today’s post I got book/author information, an excerpt, and also a giveaway. 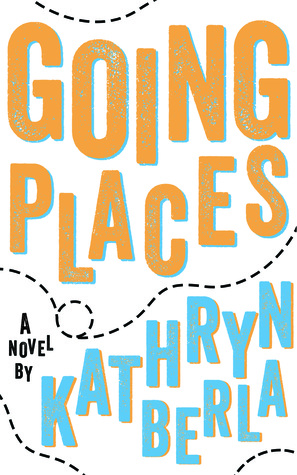 Everyone had high expectations for Hudson Wheeler. His fourth grade teacher even wrote to his parents that Hudson was “going places.” But everything went downhill after his father died on the battlefield of Iraq one year later. Now facing his senior year of high school without his two best friends by his side and with his teacher’s letter still haunting him, Hudson seizes homeschooling as an opportunity to retreat from the world.

What happens during this year will prove to be anything but a retreat, as Hudson experiences love and rejection for the first time and solves the painful mystery of the “girl in the window”—an apparition seen only by the WWII vet whose poignant plight forces Hudson out of the comfort zone of boyhood.

Going Places is a peek into what male adolescence looks like today for those who don’t follow traditional paths as they strive to find themselves.

Kathryn Berla likes to write in a variety of genres including light fantasy, contemporary literary fiction, and even horror. She is the author of the young adult novels: 12 Hours in Paradise, Dream Me, The House at 758, and Going Places. The Kitty Committee is her first novel written for adult readers.
Kathryn grew up in India, Syria, Europe, and Africa. Her love for experiencing new cultures runs deep, and she gives into it whenever she can. She has been an avid movie buff since childhood, and often sees the movie in her head before she writes the book.
Kathryn graduated from the University of California in Berkeley with a degree in English. She lives in the San Francisco Bay Area.

I read it over one last time. Did I argue my point effectively? After two weeks of planning was I overthinking the whole thing? It was already the first of August, and sleeping in until noon was almost a thing of the past. The first day of school loomed like the grim reaper. I clicked SEND before time ran out and Mom’s lunch break was over. Before time ran out and my summer vacation was over. Then I sat back and held my breath. Not literally, of course, even though it felt like it.

We need to talk. I was going to say something last night but decided it’s better to lay it all out for you first. I have a proposal that you probably won’t like, but please read this whole email before you answer. I think I should be homeschooled this year. These are my reasons:

(1) I only need two classes to graduate, and I’ve proved I work better on my own.

(2) Senior year of high school is a complete waste of time. Nobody pays attention, and half the kids don’t bother showing up for class half the time.

(3) College isn’t a requirement for becoming a graphic novelist, and there’s no doubt in my mind now that’s what I want to do when I graduate.

(4) Quentin Tarantino (famous film director) dropped out of school at the age of 15 and his mother didn’t care, and look where he is now.

(5) I’ve done ALL the research. I downloaded ALL the paperwork. The only thing I need is your signa-ture in a few places. I PROMISE I’ll take care of EVERYTHING!!! I’m begging you to say YES!!!!

P.S. I’ve been thinking about this all summer so don’t think it’s something I just came up with.

P.P.S. And please don’t think this has anything to do with a failure on your part about being a good mother, etc.

It wasn’t that I was scared of Mom, who is actually a really nice and understanding person. It’s just that I was scared she’d say “no,” and over the past few weeks I’d managed to convince myself this was the only possible way of surviving my senior year of high school. I wasn’t prepared to deal with a flat-out No. Couldn’t even consider that awful possibility.