I am so happy that I can host for the Blog Tour for The Final Six, the newest book by Alexandra Monir. I have been looking forward to the book for a long time, I just adore books about sending teens to some planet (or satellite). I cannot wait to see what challenges these kids will have to do, plus see what kind of stuff is at risk, and more. Just one more day to wait, the book releases tomorrow.

For today’s post I got information on the book and the author, but I also got an exclusive excerpt. Then there is a booktrailer, and a giveaway (open to all). Yep, it is a full post today! 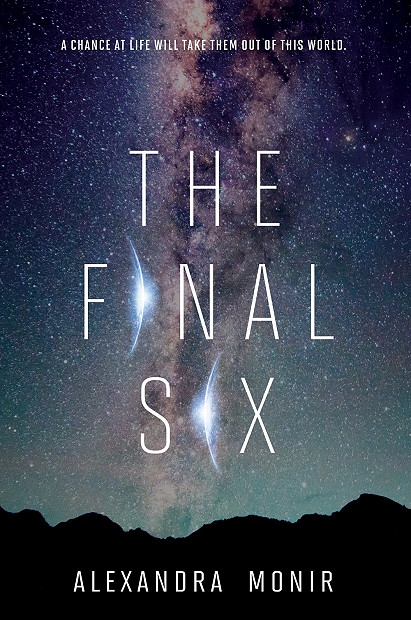 When Leo, an Italian championship swimmer, and Naomi, a science genius from California, are two of the twenty-four teens drafted into the International Space Training Camp, their lives are forever altered. After erratic climate change has made Earth a dangerous place to live, the fate of the population rests on the shoulders of the final six who will be scouting a new planet. Intense training, global scrutiny, and cutthroat opponents are only a few of the hurdles the contestants must endure in this competition.

For Leo, the prospect of traveling to Europa—Jupiter’s moon—to help resettle humankind is just the sense of purpose he’s been yearning for since losing his entire family in the flooding of Rome. Naomi, after learning of a similar space mission that mysteriously failed, suspects the ISTC isn’t being up front with them about what’s at risk.

As the race to the final six advances, the tests get more challenging—even deadly. With pressure mounting, Naomi finds an unexpected friend in Leo, and the two grow closer with each mind-boggling experience they encounter. But it’s only when the finalists become fewer and their destinies grow nearer that the two can fathom the full weight of everything at stake: the world, the stars, and their lives.

Iranian-American author and recording artist Alexandra Monir has published five novels for young adults, including her popular debut, Timeless. A Barnes & Noble bestseller and one of Amazon’s “Best Books of the Month,” Timeless and its sequel, Timekeeper, have been featured in numerous media outlets and been published in different countries around the world. She followed the duology with Suspicion and The Girl in the Picture, both standalone YA thrillers. Her upcoming science fiction novel, THE FINAL SIX (March 6, 2018) was acquired by HarperCollins and Sony Pictures on the same week, in two major pre-emptive deals.
Alexandra is also a singer/songwriter who often integrates music into her books’ pages. She wrote and recorded three original songs to accompany Timeless and Timekeeper, which were released as the album The Timeless EP and distributed by Jimmy Buffett’s record label, Mailboat Records. She also recorded a song that was released with the publication of Suspicion, and is composing a stage musical geared toward Broadway. Her musical roots are deep, as she is the granddaughter of the late Monir Vakili, the foremost Iranian opera singer.
Alexandra Monir is a frequent speaker at middle schools and high schools across the country and at major events including fan conventions, women’s leadership conferences, and book festivals. She lives in Los Angeles with her husband and newborn son. To learn more about Alexandra, visit her online at www.alexandramonir.com.

Excerpt time! This is from the first chapter.

LEOThe memories feel like snippets from another life. I can remember sitting around the TV with Angelica and our parents, the four of us glued to the live United Nations press conference, where world leaders declared a state of war between humanity and our environment. I remember the government official showing up at our door with the Europa Mission & Draft pamphlets, outlining a plan to deploy young astronauts to build a new home on Jupiter’s most promising moon, Europa. Then came the strangers, infiltrating our school the following week—”scouts,” they were called—who studied us in their search for the perfect teenage candidates for the Europa Draft. Because, as the scientists said on TV, “Only the young can tolerate the radiation-resistant bacteria that will enable humans to thrive in the current conditions on Jupiter’s moon. Only the young will still be fertile and able to procreate on Europa by the time it is terraformed and ready for a full human settlement.”

Those heady days are a blur, like a dream washed away by the flood. I guess I never thought they would actually go through with the whole extravagant idea.

I turn back to Elena. “So you’re saying they already picked the finalists? But why wouldn’t ESA and NASA just announce the names online? Why come all the way—”

I stop short, the realization practically knocking the wind out of me. “One of the finalists is from Rome?”

“Yes! Thrilling, isn’t it? Unless it’s me—then I’ll have a heart attack.” Elena shivers. “They’re going to announce who it is in a live-streaming press conference at five thirty.”

“Are you serious? We have to get inside!”

I break into a run, ignoring Elena’s protests that I can’t enter the Palazzo barefoot and dripping wet. There’s no way I’m missing this, not when one of my friends or neighbors is about to be named a finalist to go to Jupiter’s moon. I can just see my father pumping his fists in pride that a Roman was chosen, while my mother would clap her hand over her mouth in her usual dramatic way, torn between the excitement of it all and pain for the parents left behind.

The city hall’s portico entrance sank in the Great Flood along with its lower floors, so I run straight from the dock up to the covered arcade that leads into the piano nobile, the new main floor. Inside, the Old Masters on the walls are caked in a coat of film from water damage, while the elaborate painted ceilings are marred with cracks. But the old hum of activity remains, and I follow the sound of voices into the Neo-Gothic Salon, a large foyer still standing with the support of its marble columns. A glass chandelier swings tenuously from the ceiling, a shaky vestige of the pre-Flood days.

Filling nearly every square inch of the room are fellow survivors: “the Last Romans,” as they call us in the media. Everyone watches, rapt, as the Italian military officer and her companion from the ESA boat approach the podium at the front of the room, flanked by the prime minister and his wife. A trio of cameramen stand in position nearby, their equipment at the ready. My heartbeat quickens.