Welcome to the magical Book Blitz for The Grown Ups’ Crusade (The Neverland Wars #3) written by Audrey Greathouse! I haven’t read the books, but I am definitely considering reading them as I just love Neverland (with the exception of a certain fairy though).

The book was released yesterday, so a bit late, but Happy Book Birthday to the author! Congrats on your book, hope you had a wonderful day. 🎂

For today’s post I got the usual suspects, an excerpt, and a giveaway!

So let’s fly to Neverland and get this blitz started! 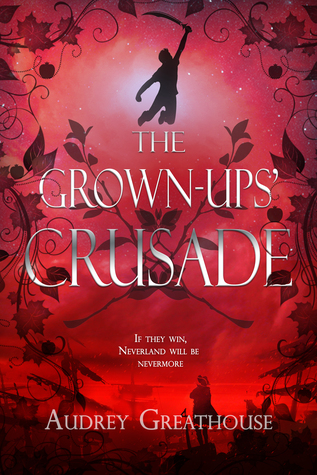 Gwen has returned to Neverland with Peter Pan and the lost children, but this time, the adults are following close behind.

The Anomalous Activity Department has plans to finally conquer Neverland by bringing the final battle to the vulnerable island. The children will have to rally fairies, mermaids, and allies from other magical realms to stand a chance against the shadow-casting army of grown-ups heading for them.

The black-coat soldiers are far from their only problem. Lasiandra is missing. No one has seen her since Gwen left her at the lakeside with Jay, and the mermaids searching have found only grave omens in the stars. With the island on the cusp of a war that threatens to strip the land of its magic, the last thing Peter and Gwen need is the ancient flagship that appears on their horizon, sailing pirates straight for their shores.

When the battle begins amid old and new enemies, Gwen’s maturity will be a double-edged sword. She will either grow stronger or grow up… maybe both.

Buy the book here:Amazon || B&N
About the author:

Audrey Greathouse is a lost child in a perpetual quest for her own post-adolescent Neverland. Originally from Seattle, she earned her English B.A. from Southern New Hampshire University’s online program while backpacking around the west coast and pretending to be a student at Stanford. A pianist, circus artist, fire-eater, street mime, swing dancer, and novelist, Audrey wears many hats wherever she is. She has grand hopes for the future which include publishing more books and owning a crockpot. You can find her at audreygreathouse.com

Gwen gathered fruit as fast as she could in the dim of the early morning. Mangos and marionberries, peaches and papayas, star fruit and oranges… she shoved the land fruit into her bag, never breaking pace as she trekked weast across the island. She needed to get to the coast and back before any fairies awoke. The entire fairy population had indulged in joyful revelries the night before, celebrating some amorphous holiday unknown to humans. The dawn would find even the most temperate fairies still lolling in drunken dreams and merry slumber. But dawn had not yet arrived and not everyone slept; stars still speckled the bluing sky and certain inhabitants of Neverland were still speaking with them.

Tromping over vines and fungi, Gwen bushwhacked her way through the forest-jungle on anxious feet. The mermaids had not been helpful as of late.

The new mermaids she’d met wouldn’t even give her their names. Eglantine and Cynara had been snide at best, and contemptuous at worst. Gwen wouldn’t have minded it—she didn’t care what mermaids thought of her—but she felt certain they knew what had happened to Lasiandra and refused to explain. This drowsy morning offered her a chance to tempt them with an overabundance of land fruit without anyone noticing. She would persuade the mermaids to cede their starry secrets and hurry back before any stray fairy or curious child found her at the incriminating lagoon.

Gwen reached the wood’s end and hurried down the steps carved into the chalky cliff face. She moved so fast she half-flew toward the slender figures half-submerged in the lagoon.

Gwen had not seen Lasiandra since the night she escaped with Jay from Lake Agana. In the chaos, she had never retrieved the scale from Lasiandra, and thus lost her ability to call her friend. She hadn’t worried about it—until days and weeks passed without sight of her at the lagoon.

“What business have you with Lasiandra?” Eglantine had demanded last time Gwen visited. “What matter is she to you?”

“I’m just worried about her,” Gwen had answered, innocent and truthful. The region’s entire Anomalous Activity Department had been on duty that night, trying to apprehend lost children and capture whatever magic followed them. Lasiandra’s disappearance was ominous, to say the least. A few fairies had not returned from the mission, and there was no question of what fate had befallen them.

In response, the mermaids had only mocked her, contorting their melodic voices into cackling imitations of her land-dwelling accent, “I’m just worried about her.”

“Worried about her! Concerned about a mermaid?” Cynara had declared, insulted and amused. “We are not of such a feeble nature as you landmaids. Mermaids have more strength in a single scale than you have in all of your heart. You need not worry for a mermaid, girl. We can take care of ourselves.”

Gwen had wanted to believe her.