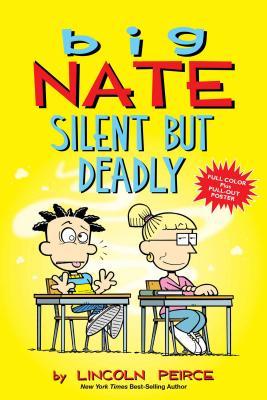 My second Big Nate comic, I don’t know why I didn’t request the others when they were on Netgalley, since this comic is just too much fun!

The biggest focus in this one is Gina (and her silent, but oh so deadly farts). She pops in a lot of the comics + is also found on the cover (and the title is a reference to her farts). I have to say that I didn’t like Gina. Yes, when she was infatuated with that guy in her class, she showed something else than terrible attitude, but for most? I don’t want her around that much. Know-it-alls get on my nerves. Thinking they are way more superior than others. Bleh! I did love the Fact Town Smackdown and what happened there (though I sure didn’t see that Wacky Plot Twist coming).

I had a laugh at Nate and his amazing nose. Boy, that is one skill he could use later in life. Given his school-record, I think he will need something amazing, like his nose, to save him. 😛 It was quite fun how people doubted him and then he could just pick out everything + more.

I liked that Nate tried to go for that trophy. Of course, those who read these comics know that Nate is never going to get a trophy, well, maybe if there was a terrible student trophy (sorry, Nate) or guy with the most detentions.

Other topics include finding a new comic (and is it betrayal if you like that MC more than your favourite comic?), basketball, monopoly (no, Nate, that is not how it works), Christmas presents, School Picture Day, and many many more.

The only thing I didn’t quite like was that at times it got a bit confusing as we were in the midst of a topic (for instant the Fact Town Smackdown) only to have another comic pop up in between things. It would have been better had the topics stuck together.

The art was so-so. At times Nate didn’t look like a kid, but more like an old man, mostly when he turned around his head or tried to look sideways.

But I definitely liked this book, and I hope to read more Big Nate books in the future.