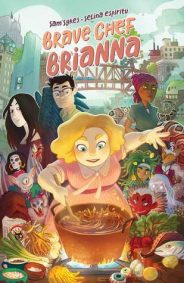 Brianna has to prove that she is an awesome chef, and so proceeds to do that in a city full of monsters!

I came across this comic through another comic I was reading, I just had to try it out and I am so so happy I did. This was too much fun. I do adore comics about cooking, especially when they add something extra to the mix. Like this one has monsters, or with Space Battle Lunchtime and aliens.

Brianna’s father is a big name in the cooking world, and he has set up a contest. Brianna and her brothers will have to compete. One of them can use his last name! Something that will surely help with making people come to a restaurant. All her brothers are immediately interesting, but Brianna worries. She isn’t used to working at a restaurant + she has to find a place that isn’t too expensive. I loved that while she was worrying, she didn’t just give up. She went to search for a place and found one in a very special place. Which had me squeeing. Come on, a city full with monsters? All living, relatively, happy together? Oh yes!

And at first Brianna’s restaurant starts off well, but she quickly learns there are some rules in place… the monsters CANNOT eat certain ingredients (because humans are ick). You can imagine that Brianna goes in a tizzy, but then decides to lie and go on with what she is doing. Which sounds a bit rude, but I can imagine that she will continue, especially since so many people are coming for her specialities. They don’t want those boring other foods or monster foods, they want burgers. They want fries! And trying to make those without those ingredients… well… not working. So you can imagine the choice Brianna made. And it showed in her restaurant. All the monsters loved her food!

I also quite liked, well maybe liked is the wrong word, more that it made her more real and made you really root for the girl, that you could also see that not everything went easy for this girl. She had some dark thoughts at time that often would overload her. But we can also see that she is able to dispel those bad thoughts and just keep trying.

Suzan, the harpy girl who is helping out Brianna with her restaurant. I have to say that in the beginning I didn’t like her that much. For a whole load of reasons. Sorry, I used to quite be interested in grumpy characters, but lately I just can’t like them. But later on I started liking her more and more. Plus it seemed that all she needed was a bit love and attention for her to bloom.

Kevin, the guy who keeps popping up and eventually becomes just as much a part of the restaurant as Suzan. I liked him from the start, and was happy that he became a permanent fixture in the story.

There is also a baddie in the story, why wouldn’t there be. 😛 I really didn’t like the old crone. Just let people be people. I get that you are probably worried no one will come to your restaurant, but seriously? I am sure people will still visit yours if they are in the need for some fancy smancy monster food. I just didn’t like how she kept trying to find something to destroy Brianna’s dreams with. Evidence/proof/witnesses, anything really. sighs I also feel sorry for her assistant. I can’t imagine what kind of hell that is to work with the old woman.

I liked the food contest against Brianna’s brother (I still think it is cheating that he is doing the restaurant thing like this), and also the final battle against the old crone.

I am a bit sad that the comics don’t seem to continue any further. I would have loved to see more Brianna. Maybe see more of her relationship with her dad and her brothers. But also see her expand her restaurant and make more different recipes!

Oh, lastly, the art was quite fun!

All in all, this is one comic I would recommend to everyone looking for a fun, monsterific comic with cooking.