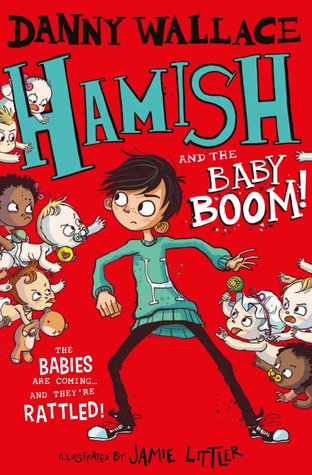 Warning warning babies on the loose! It is time for a bayhem!

The newest (and very shiny) Hamish book and this time they are up to their neck in stinky nappies as the babies are rising and are growing faster than they should. Yep. It is time for a Baby BOOM!

The book immediately gets to the action as Hamish and his mom are at the hospital for a baby visit. We see that all sorts of things go wrong at the hospital. People arguing, babies having tantrums, a baby with a baby blue spanner! But of course Hamish first needs to find a bit more proof as he already had a few false alarms (which meant one restaurant is now still without a good roof :P). You can imagine how the PDF reacts to Hamish when he does tell them. Yep. Try telling your friends that babies are doing funky stuff and you suspect being stalked by them.

But quite soon his friends see in that something is going wonky in the world. Babies are indeed acting weirdly, they are doing stuff that they shouldn’t be doing. Like riding a pram alone like an expert Formula One driver. Or doing crossword puzzles. Or tearing off mirrors from a car. They quickly see that there is something wrong. But still, finding evidence and then contacting Belasko. Yep. You guessed it. There is something going in Starkley and Hamish’s dad is out of town to find Scarmash. What a coincidence right? I just knew something was up, it was just too suspicious.

The baby situation went from OMG weird to OMG we are all going to be screwed in a pretty nice tempo. It didn’t feel rushed or hurried. Instead you saw things getting steadily worse as the days went on. The babies were pretty creepy though I loved how most adults just wouldn’t see that something was wrong.

I did feel sorry for Hamish and PDF and the articles that were circulating everywhere talking about how the PDF sucks/isn’t real/etc. etc.. You could clearly see that Hamish was hurting. Of course later we find out why the articles were so terrible and it made sense, but still, how could anyone do that? Is your job so important you would rather write terrible stuff than to just resign?

I had a laugh that it took the kids quite a long time to figure out what was happening to the babies. I just knew from the moment THAT was introduced it was the source of all problems. Of course I didn’t know where it came from, but hey, details.

I also hope that the two towns can be happier together now that certain elements are gone. It would be nice.

And I hope that Venk will find something he is good at, or at least doesn’t feel so left out. 🙁

Again tons of compliments for the fun, brilliant illustrations!

I can’t wait for the next Hamish book, I need it now!