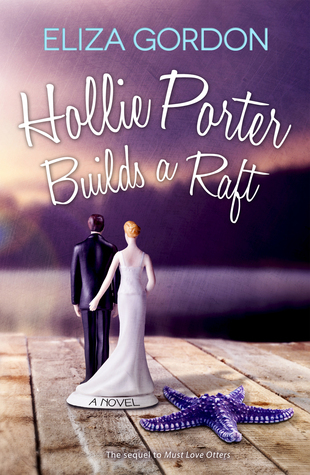 Hollie and Ryan are back! They have been together for a year now (which we sadly didn’t see). This time there is lots of swooning, annoying moms, and a wedding! Oh and otters, of course there are otters.

I just finished book 1 and I just had to continue with book 2 (which I started as first as there was no mention anywhere this was book 2). I left at the good part (the proposal) so I was dying to continue reading this one and see how it would end up (hopefully no puking this time).

And it was just so fun. We see how Hollie is enjoying her time at the resort, helping out as an educator (and doing an awesome job at it). She is really part of the family now, accepted and loved by everyone there. And she is also feeling very much at home, though of course missing her dad who still lives in Portland.

Of course this book is full of hilarious situations as well, though also some sadder ones (damn you demon goat). Hollie’s life is still full of things that will make you laugh/shake your head. Like that one thing with the hot dog? Poor Ryan! Or that crow?
But we also see a very brave side of her when she goes against anything allowed to do that. It must have been a pretty tough decision for her, but I am very happy that she made it. Plus everyone else, mostly afterwards, was also very happy with her decision to just go for it.

I loved seeing Hollie get her wedding ready. Worry about dresses and costs about if she is ready, enjoy it as cake sampling is quite yummy and also dresses are quite gorgeous, happiness as she knows that soon she will be spending her life with Ryan.

There is also plenty of romance, sweet moments between Ryan and Hollie, and boy oh boy, these two are just so cute together. Their spark is still very much there and I just adore how they tease each other, make jokes. Plus, as Hollie said, how you can resist a guy who goes as far to sing Celine Dion songs to get into your pants? 😛

At the beginning and middle of the book Hollie still calls Ryan her boyfriend but later she calls him her fiancé. Awww! melts

Haha, I just knew that Sarah’s baby would come at THAT TIME. Of course, welcome to Hollie’s life where things don’t always go how it should go. 😛 Poor Hollie. She so deserves a moment away from all this craziness (though I am guessing craziness will just follow this girl). I just felt so terrible when things didn’t go as planned. I was even holding my breath while reading, hoping that everything would be fine. Poor Hollie. 🙁 I can imagine why she did what she did. I think I would have done the same. Sometimes it just gets too much. Sometimes you just need to go away, even if it is for a little bit.

The wedding? OMG it was just perfection, so sweet, so adorable, so oh man, I want my wedding to be like this. Ryan’s plan was just the sweetest and I loved him more for it.

The epilogue? I am so happy that that was the epilogue, I was already worried a certain event would happen (have seen it happen too many times). I do hope that we get another Hollie/Ryan book about what is said in the epilogue.

-1 big fat star for the whole Mom/Lucy stuff. Can we for all that is holy just have one book somewhere that doesn’t go into a sob story or forces the MC (aka the daughter) to just suck it up and maybe the mom has had a harsh life, boohoo. Can we just have a story where the daughter (or son) just goes F this and then proceeds to just get rid of the mother (nicely of course, but still, get rid of her)? Please? Because I was seriously pissed at Lucy and how shitty she acted, and how then later on she was all sweet and caring and sorry and blablablalablaalblaa. snorts and rolls her eyes I hated Lucy from the start, I never will like her, and sorry, I just found the whole turn around not to my liking. Plus again, how everyone was just pushing Hollie to accept her mom and not be so angry and negative. If that girl wants that, why are you all stopping her and making all kind of sobby excuses? Bleh. A lot of the shit could have been stopped if they had just gotten rid of the mom from the start. Is it that hard to say no in this world? Or to just not forgive someone for once? And I am very forgiving person myself, normally. But Lucy just annoyed me to no end.

But yeah, thanks to that -1 star the book only gets 4 stars, and that means that, sadly, I won’t be adding this book to my physical collection. Which is a shame, as I will be buying the first book in paperback when I have a chance and I was hoping to add this one as well.
I still had lots of fun reading it. I laughed, I cried, I cheered, I laughed some more. I would definitely recommend this book (and the first one) to everyone!