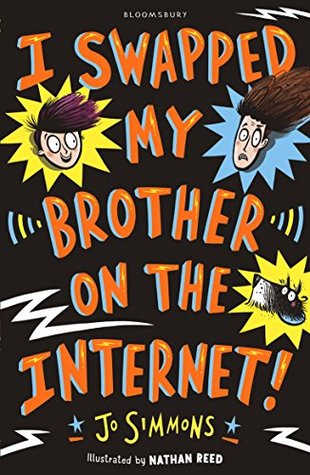 A fun, delightful book about siblings.

I just had to try out this book, I don’t have any siblings myself (how I wish, but it is now way too late for that), but I still know, from friends, that having siblings isn’t always fun. So I was eager to see what Jonny would do when he found out about the sibling swap online!

Because Jonny isn’t too happy with his brother Ted. And for good reasons. His brother is always making stupid or mean remarks, always pushing him, always calling him names. I can imagine he may want to swap and get another sibling! And so he finds the site and tries it out. Little did he know what kind of chaos he would get into! Yep. Sibling swapping isn’t that easily, especially with a wonky/magical site. Plus, maybe he should have ticked that little human box, instead of leaving it unchecked. 😛 But hey, thanks to that he did get a lot of fun and interesting siblings.

Yep, we start of with Mervyn. I already had a fairly good idea what he was, and I was delighted to see my suspicions be right. I think he was the best out of the siblings. But I can also understand why it didn’t work out. Mervyn just isn’t happy, and Jonny would have to help out all the time. 🙁

Alfie was the most annoying one out of all the siblings. I can imagine people want to swap him. He was just terrible. He didn’t understand how to be kind and friendly, instead he just manipulated, didn’t get the hint, and I think it would have been perfect if he had just stayed inside that room at the Sibling Swap place forever.

I had a laugh at J2. That was a fun one, though his attitude was pretty terrible. He was in a way the same as our MC, but also totally different in regards to personality.

Pete was the biggest surprise, I definitely hadn’t expected them to be that or to do it for those reasons! How delightful! And then I had a laugh later on, but because of what you will have to read the book, I am not going to spoil a thing! Ha!

I loved how the book didn’t only showcase all the weird siblings, but also showed that Jonny was thinking about his own brother, Ted. He started to remember the good times, how Ted would care for him when sick, how he would be there to help him out. Yep, Jonny was seeing the light. He was seeing that maybe his own brother isn’t too bad. But how do you get him back, and most important of all… does Ted want to come back home after his own brother dumped him for other siblings? So I was happy when we did see Ted and how he wanted his brother to show him his love and care. That he really wanted Ted back.

I still have several questions regarding the whole swapping. How did they get all the kids in the rooms? Kidnap them? Drug them? Magical teleportation? How did the whole swapping work? I have checked my copy but I just can’t find the answers. Just who set it all up (which was a delightful surprise), and why they did it. Also why is the mom such a ditz? Is this to do with the site (again I am still unsure if the site was just that or more given the applicants, the swapping stuff, and some other things) or is she just that vacant in her mind?

The ending was terrific and exciting, and I was definitely happy with how it all ended for everyone.

The book is illustrated by Nathan Reed and his art just fits the silliness of this book to a T.

Extra points to the fabulous title!

All in all, this book will make you laugh, but also will make you sniffle a little (as you see Jonny realise that he misses his own brother). I would recommend it to all!