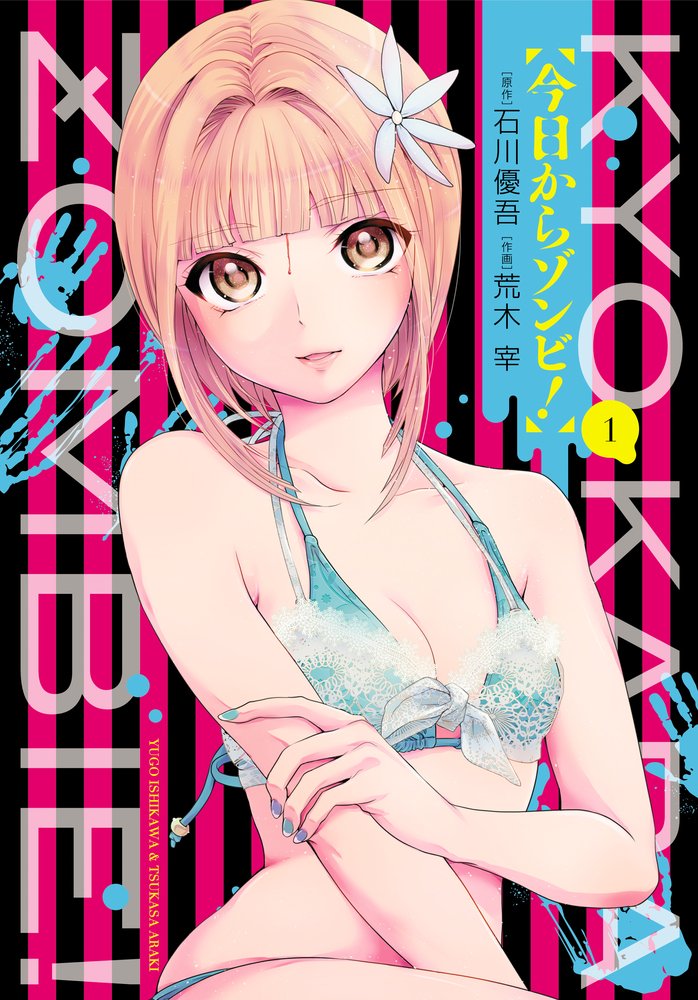 A fun zombie-tastic book with an interesting twist.

I was really curious when I came across this manga. I knew from the blurb that it would feature zombies, but I hadn’t expected THAT.

So the manga starts out pretty calm, though you quickly could see something is coming when the car passes a sign with a zombie on it. You would think that is enough incentive that, should one hit something, to not step outside and try to check the body. And I definitely wouldn’t be hahaing and then dragging said zombie to the bushes. I have read and seen enough horror to know what is going to happen if one does that. But hey, we need a story, and thus this story starts. Our MC, Fuuka has to run away (I wasn’t surprised she couldn’t drive) and she gets pretty far… but then due to a small incident… gets bitten (in a very awkward spot even). Hey, no spoilers, the fact she got bitten is in the blurb! 😛

What surprised me was that this book doesn’t take place during the zombie apocalypse, but more years and years after it. For some reason Fuuka’s generation doesn’t even know about them, even if the zombies still wander around. Really, teach your kids some zombie stuff, it is important. Another thing that surprised me is that there are two kinds of zombies. You have the brainless, staggering, om nom nom humans kind, and you have the sentient kind. Fuuka, probably thanks to the guy she was bit by is one of the sentient ones. However now that she is a zombie she cannot go back to her own world, and has to live in a small village filled to the brim with zombies.

I had such a laugh at Fuuka. She is undead herself, but really can’t stand anything zombie like. She pukes quite a few times during the volume, even though she often says something in the likes of that she is fine. Girl, you are not fine if you puke your intestines out.

The guy who bit Fuuka (on accident) also shows her the history of the zombies and the apocalypse. Which made me laugh as he was clearly not amused with the fact that these zombies just bit everything, made a mess of things, and ATE HUMANS.

The village is a pretty nice place actually, though it could do with a bit of a clean-up. We also see a bit of the outside world later and it made me sad that Fuuka will never be able to be normal again. She will always be away from her family, her friends, her work, everything. And yes, I had to wipe away a tear when that scene passed by. Poor Fuuka.

How the zombies are seemingly not looking too shabby? Well, there is something of an elixir that makes people look human again. It is pretty amazing stuff, I am sure there are humans who would also want to try it (though they may run away if they know the ingredients).

We meet all sorts of zombies. From a tiny girl living in the amusement park (not creepy at all) to a grandma who had to have an emergency transplant for reasons. I can’t wait to see who else we will meet over the course of this series.

And I am also curious what Fuuka will do in the coming chapters. Will she start a career at the zombie place? Will someone from the outside/human world find her? Will she be able to settle down in this weird and gruesome place? Will she accept her zombie state?

Then there is the art and I quite love how the author drew the zombies. There is some gore, but then again that is to be expected with a zombie manga.

All in all, this is one fun volume and I can’t wait for more. Hopefully one day this one will get an anime.